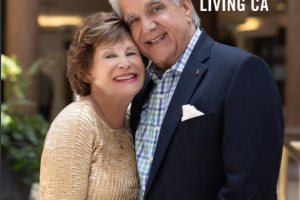 Blackhawk Living—If you’ve never met Thomas Loarie, there’s a chance you might recognize his voice. He co-hosts a radio show called The Mentors Radio, which airs Saturdays on the Salem Radio Network in California (KTRB AM860) and worldwide, on iHeart Radio.

“We are now in our fifth year,” says Loarie. “We feature guests from all walks of life, from well-known CEOs, authors, a drug-dealer-turned-Death-Row-chaplain, to a former movie star who just celebrated her golden jubilee as a nun.

“I was selected to be a host based on several factors: I am one of Amazon.com’s top book reviewers, my role as program director for the Oakland Diocese’s Catholics@Work Speakers Series over the past 20 years, and my ongoing work as co-leader with SING, a transition ministry of St. Isidore Catholic Church, which is focused on helping those in career transition. All of this experience has provided me with access to people from all over the world, has kept my feet on the ground and has provided balance in life,” says Tom. (He’s also one of the longest-running columnists on Catholic Business Journal.)