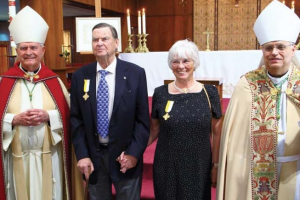 The North Star Catholic—On May 17, Archbishop Bellisario presented the Benemerenti Medal to Ed and Cathy Rasmuson during vespers at Holy Family Old Cathedral in Anchorage. It was a special recognition bestowed by the Holy Father, Pope Francis, to the Rasmusons for their lasting and exceptional service to the Catholic Church and the people of Alaska.

Archbishop Emeritus Roger Schwietz, OMI was also in attendance and gave a homily after the vespers reading. He thanked Ed and Cathy Rasmuson for their decades of extraordinary support of the Church dating back to Archbishop Hurley during the homily. He also acknowledged the good works of the Rasmuson Foundation that assists communities throughout the state of Alaska.

He concluded his homily with the inspiring exhortation: “May God continue to bless you in your work to raise up among us the dignity of others, a dignity we all share and that has been given to us by our God.” 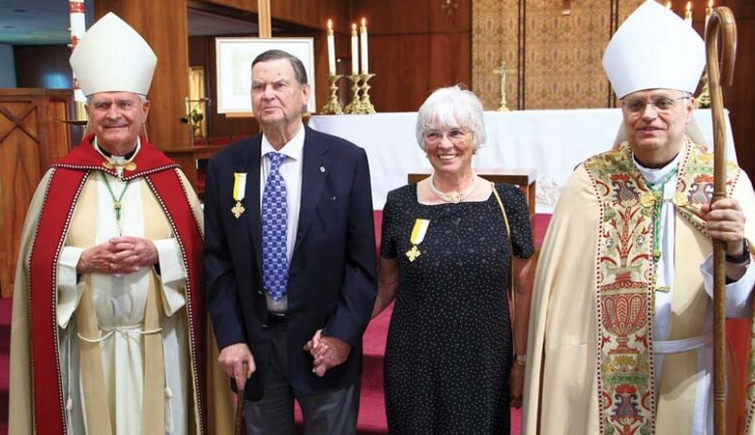 Archbishop Andrew Bellisario, C.M. shared why the Rasmusons were being recongized, “Ed and Cathy Rasmuson’s commitment and support over many years to the Catholic Church, and to so many individuals in need within Anchorage and our State of Alaska, through their personal generosity and the Rasmuson Foundation, is well known and greatly appreciated by all the people they have helped.”

Archbishop Bellisario then bestowed the Papal medals to Ed and Cathy. He translated the succinct Latin message on the… Read more>