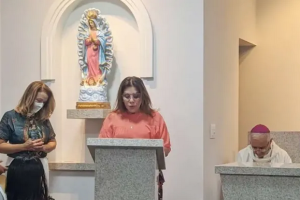 This integration of profound faith with business has changed lives and for two truckers, in a most dramatic way.

Rede Marajó (the service station company) serves the entire length of the 1,200-mile Belém-Brasilia Highway, which takes about 30 hours to drive. Vaz said that the idea for building the chapels came from thinking about truck drivers to traverse the long highway.  Each chapel is dedicated to Our Lady under one of her different Marian titles.

“It feels like an oasis in the middle of the desert for them. This oasis has already saved at least two truckers from suicide,” she recounted.

Two truckers saved from suicide, thanks to the chapels

The first truck driver arrived at the Nova Olinda station at night “very desperate” and “with a gun” because he “wanted to take his own life.”

When the night watchman saw this driver, he took him to the chapel of Our Lady of Graces and he stayed there for a while.

“When he left, he was completely different and he no longer had the intention of committing suicide, and he said that he was even going to get rid of the weapon,” Vaz recalled.

The second incident occurred recently at the Belém station, in the chapel of Our Lady of Nazareth, when a truck driver who visited the chapel met a priest and decided not to commit suicide.

Vaz recounted that on that day the visiting priest “thought the sanctuary lamp next to the tabernacle had gone out,” so he went into the chapel to light it and saw a man crying.

“The priest identified himself and asked if he could help. The man replied that he had gone into the chapel with the idea of taking his own life, but he had told God: ‘If I find a priest here who hears my confession, I’ll change my mind.’ It was just then that the priest came in and the man talked, the priest prayed with him, and he changed his mind,” Vaz related.

Prayer is integrated into the fabric of the company:

Finally, Vaz said that the company encourages its employees to live the Catholic faith and that at all of their gas stations, even those that do not yet have a chapel, they offer a monthly Mass.

In addition, Vaz added, every morning the workers pray together with the aid of the liturgy of the day.

She explained that the employees “aren’t obliged” to pray, but “everything stops until the prayer takes place.” That said, Vaz noted that the vast majority participate, because “there is a great unity between Catholics and non-Catholics.”

This story was first published by ACI Digital, CNA’s Portuguese-language news partner. It has been translated and adapted by CNA… and further edited by Catholic Business Journal journalists.