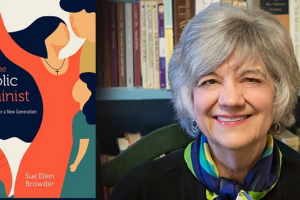 Former Cosmo writer: “I wrote this book as an act of atonement.”

Here is an interesting Q&A interview with a former Cosmo journalist, who really spills the beans on insider editorial mandates she and others had to follow in crafting articles, and why she wrote her newest book just released by Ignatius Press.. -ed, CBJ

“Rather than abandon the word ‘feminism’,” says Sue Ellen Browder, author of Sex and the Catholic Feminist: New Choices for a New Generation, “Christians need to restore it to its proper meaning.”

Over the last 60 years or so, the “sexual revolution” has transformed nearly every aspect of American society. Propaganda for the sexual revolution flowed from the pages of such publications as Cosmopolitan, where a young journalist named Sue Ellen Browder (among others) worked hard to push unmarried sex, contraception, and abortion as integral aspects of feminism and liberation for women. Browder’s life and her role in the movement are chronicled in Subverted: How I Helped the Sexual Revolution Hijack the Women’s Movement (Ignatius Press, 2019). Browder now works tirelessly to make reparation for the part she played in the sexual revolution.

Her latest book is Sex and the Catholic Feminist: New Choices for a New Generation (Ignatius Press/Augustine Institute, 2020). In this book, Browder looks at the Christian and Catholic thread of the feminist movement, exploring how it has been ignored by the mainstream media for over 50 years. She challenges the notion that feminism is inherently atheistic. She emphasizes that feminism is about a search for personhood and identity—a search that will only find what it seeks in God.

Browder recently corresponded with Catholic World Report about her latest book, feminism, and her role in the sexual revolution (and how she hopes to atone for that).

Q. Paul Senz, for CWR: How did the book come about?

A. Sue Ellen Browder: I wrote this book as an act of atonement. From the 1970s into the 1990s I worked first on staff, then as a freelance writer, for Cosmopolitan magazine, where many stories we concocted about women having all these exciting, “fulfilling” sex lives were completely made up. Cosmo‘s editor-in-chief, Helen Gurley Brown, even had a list of “rules” on how to write for Cosmo, which included guidelines on how to fabricate anecdotes about … read more>>