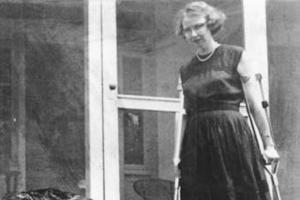 When the Fordham professor heard that Flannery O’Connor’s name would be removed from a residence hall at Loyola University Maryland, due to concerns over apparently racist remarks in some of her personal correspondence, O’Donnell decided to act by petitioning the university to reconsider. Her petition has been signed by more than 200 people, including O’Connor scholars, theologians, and writers of color.

So far, O’Donnell has not received a response.

A teachable moment, not a swift erasure of a brilliant writer, faithful Catholic

“I thought it was a great teachable moment for Loyola to have an opportunity to talk with students and take their time. I really don’t understand the rush,” she said. O’Donnell’s advocacy for O’Connor is not so much about a building, she said, and it’s not to deny O’Connor’s racist comments.

Rather, it’s about the swift erasure – the canceling, if you will – of O’Connor without the campus community considering a fuller picture of her person and what her work has to say to the current generation.

“I know Father Linnane says people can still teach Flannery O’Connor, that she’s not being removed from campus,” O’Donnell said. “But I don’t think Father Linnane realizes that, effectively, she’s not going to be on campus anymore, unless the faculty member (teaching her works) is tenured and also is very brave, and wants to have these conversations about race.”

O’Connor was a short story writer, novelist, and essayist as well as a devout Catholic who attended daily Mass. She lived most of her life in Georgia and became renowned for her biting Southern Gothic style of fiction. She died of lupus in 1964, at the age of 39.

Attention was drawn to apparent racism in O’Connor’s personal writings by “How Racist Was Flannery O’Connor?”, a piece that appeared in the New Yorker in June. There, Paul Elie wrote that “letters and postcards she sent home from the North in 1943 were made available to scholars only in 2014, and they show O’Connor as a bigoted young woman.” Some of the passages quoted by Elie had been published for the first time in O’Donnell’s book.

Racism and O’Connor: The fuller picture

O’Donnell said professors should not ignore O’Connor’s comments about race in her correspondence. Rather, she said, they should be seen as just one piece of the full picture of who Flannery O’Connor was, and be compared to the way she treats racism in her works of fiction.

“It’s got to be a conversation about race. I welcome that,” O’Donnell said, adding that the purpose of her book in the first place was to genuinely pose the question of how Flannery can still be taught in classrooms given some of her problematic racist comments in her personal letters.

“How do you teach Flannery O’Connor in the classroom? What can you do? Because I think it’s worth us considering it from the angle of pedagogy and culture, how you encounter every writer. Every writer needs to be reevaluated with each new generation, and then we decide what it is that he or she has to offer, and whether or not it’s helpful. And so this is a really good moment to reevaluate O’Connor in a thoughtful way,” she said, “and not the way that Elie does, and not the way that Loyola has done.”

In many ways, O’Donnell noted, O’Connor is the perfect author for this moment in history especially because of how she treats racism in her work, which faces its ugliness head-on and views it as a sin.

“Her stories are powerful, iconic stories, and very realistic gritty depictions of what it was like to be alive in a culture, the very, very racist culture of the American south during the Civil Rights Movement, during a time of enormous change,” O’Donnell said.

How Flannery described herself

O’Connor’s favorite description of her job as a fiction writer was to live “hotly in pursuit of the real,” O’Donnell said, so her stories “do not look away from very difficult and challenging situations.”

In her stories, O’Connor portrays “a complex sort of dance that black Americans and white Americans had to negotiate in order to live together in a segregated culture. And it always reflects badly on white people, because they were – most white people are – ignorant of their racism. And the few who do know it oftentimes are proud of it and think it’s a badge of honor. And she just mercilessly exposes those people,” O’Donnell said.

O’Donnell said there are “all sorts of ways” in which Americans today experience the same or similar kinds of racism, whether personally or systemically. “And the fact that we have this writer who exposes it so knowingly, and exposes it to censure, it’s a powerful way of seeing how far we have not come,” she said.

As a devout Catholic, Flannery thought about racism in theological terms: As a sin

As a devout Catholic, O’Connor also “thought about this in theological terms. She thought that racism was a sin. A sin against God, a sin against human beings, a sin against grace. And so in a number of her stories the people who are the most egregious racists really get their comeuppance in the course of the story,” she added.

Alice Walker, an African American writer and feminist who grew up in the same area of Georgia as the O’Connors, was one of the signatories of the petition sent to Loyola University Maryland. The letter opens with a statement from Walker, who said: “We must honor Flannery for growing. Hide nothing of what she was, and use that to teach.”

Walker herself is an admirer of O’Connor’s work. In an essay that appeared in the Dec. 1994/Jan. 1995 edition of Sojourners magazine, Walker wrote that it was O’Connor’s biting portrayal of Southern white people that initially captured her attention.

“It was for her description of Southern white women that I appreciated her work at first, because when she set her pen to them not a whiff of magnolia hovered in the air (and the tree itself might never have been planted), and yes, I could say, yes, these white folks without the magnolia (who are indifferent to the tree’s existence), and these black folks without melons and superior racial patience, these are like Southerners that I know,” Walker wrote.

O’Donnell added that Walker has also, in her past critiques of O’Connor, “really admired the fact that O’Connor did not pretend to be able to get inside the minds of her black characters.”

O’Connor admitted at one point that she did not write from the perspective of African Americans because she did not understand them.

“And so Walker saw this as a kind of a respectful distance that O’Connor kept, allowing black characters to have their own privacy, so she never pretends to know what they’re thinking.”

“I think what Walker valued was that she could see in O’Connor, this development, this struggle, and was wrestling with the problem of race. And…it’s foolish and shortsighted not to honor that and acknowledge that as being human.”

Something else that people today can learn from O’Connor is how to face and challenge the racism that exists even within themselves, O’Donnell said.

Flannery teaches us about our own blindness, today

“All of us who are born and raised in this white privileged culture, we imbibe this from the time that we’re born into the world, and it’s impossible for us to escape it. It’s just impossible,” she said.

Savor and See for yourself

For those who want to read some of O’Connor’s most poignant fiction that treats racism, O’Donnell recommended four stories. The first, “Revelation,” was one of O’Connor’s “last stories and one of her most powerful stories. It is a portrait of a racist who has a wake-up call and understands very clearly what she’s guilty of by the end of the story. And in some ways that person, that main character, is a portrait of O’Connor.”

Another story by O’Connor about race that O’Donnell recommended is “Everything That Rises Must Converge,” in which one of the characters seeks to atone for the racism of his mother, and must confront his own hypocrisy.

Another story, “The Geranium,” is one of the first that O’Connor ever published.

“It’s about an old white man who goes to live in New York with his daughter, and is horrified when he moves next door to black people. And he has a wake-up call,” O’Donnell said.

“And the last story that Flannery worked on on her death bed was a rewriting of that same story, it’s called ‘Judgment Day.’ So, O’Connor’s work – she only wrote 31 stories- is book-ended by these two stories and that story she rewrote four times in the course of her life.”

“And with each new version, her depiction of the relationship between the races gets more and more complex as she goes along. That is a sign of somebody who, throughout the course of her professional life as a writer, is growing and changing and developing,” O’Donnell said.

“She’s at war with herself in many ways and trying to figure out what she thinks. But the victory is you can see in the stories where she’s going and what she thinks,” she added.

O’Donnell said that going forward, she hopes that Flannery O’Connor gets a fairer and more honest consideration than a cursory glance at some of her racist remarks in her personal letters.

At Loyola University Maryland, Flannery O’Connor’s name could be used on a more appropriate building, such as a literary arts building or theater, she noted.

“I would really just encourage people to read the stories and decide for themselves what O’Connor is doing,” O’Donnell said. “And also to understand that the things that she says in her letters are problematic. Absolutely, no question about it. Nobody is going to side step that.”

“But we don’t remember Flannery O’Connor for her letters. We remember her for her stories. That’s where we go when we have to decide whether that work is worth it. It’s a decision we have to make.”