The Great Saint Patrick of Ireland – HIS OWN WRITINGS!

I visited Westport Ireland three years ago in search of my grandmother’s (Cahill) birth certificate. It is a beautiful place on the West Coast of Ireland, north of Galway. It lies at the foot of Croagh Patrick which is named in honor of Saint Patrick, the apostle and patron of Ireland and the Irish race. According to tradition, St. Patrick fasted and prayed on the summit of Croagh Patrick for forty days in the year 441.

This visit stimulated my interest in Saint Patrick and the legends about him that pervade the Emerald Isle.

It led to my purchase of “The Confession of Saint Patrick (Confessions of St. Patrick): With the Tripartite Life, and Epistle to the Soldiers of Coroticus.”

The book is in three parts and begins with the Confession of St. Patrick, which is the brief story of St. Patrick’s life, told through his own eyes, in his own words. Reading these pages gives you the rare opportunity to look into the mind of one of history’s best-known saints. It is si 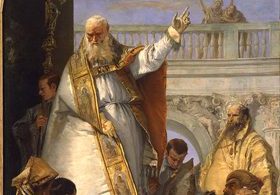 milar to St. Augustine’s Confessions and provides a stirring account of the miraculous ways that God works and encourages us into a life of courage and holiness. It is believed that St. Patrick wrote this work after having had his character attacked by those in power at the time.

“I, Patrick is center, the rudest and least of all the faithful, and most contemptible to very many, had for my father, Porteous, a deacon, the son of put it this, a priest, who lived in the Navin Cabernet, for he had a small country house close by, where I was taken captive when I was nearly 16 years of age. I knew not the true God and I was brought captive to Ireland with many thousand men, as we deserved; for we had forsaken God, and had not kept his commandments and were disobedient to our priest, who admonished us for our salvation. And the Lord brought down upon us the anger of his spirit, and scattered us amongst many nations even to the ends of the earth, were now my littleness may be seen among strangers.

“The Lord showed me my inequities and strengthened my heart towards him. I cannot and ought not be silent concerning the great benefits and graces which the Lord has bestowed upon me in the land of my captivity.”

Letter to the soldiers of Coroticus

The second part of the book, “Letter to the Soldiers of Coroticus,” is a letter written by Patrick after he had lived and worked as a bishop in Ireland for many years. Patrick wrote this scathing letter to Coroticus and the British Christians after they came to Ireland and kidnapped and killed many of Patrick’s Christian converts.

The third part of the book, “The Tripartite Life” was initially written partly in Irish and in other parts using Latin from the late 9th century. It focuses on St. Patrick’s life in three parts. It was written to be read in three parts and over the three days of the saint’s festival. I found this part to be the most difficult to get through. I suspect, though, it is an academic feast for historians.

The reader will gain a deeper understanding of St. Patrick and Irish history with “Confessions of St. Patrick: With the Tripartite Life, and Epistle to the Soldiers of Coroticus.”This book is derived from historical documents.

While some may find this book a difficult read, I am giving it five stars. Stories written in the fifth century by St. Patrick deserve nothing less. These are rich treasures of our Catholic heritage and it’s a transforming experience to have the privilege to read them.