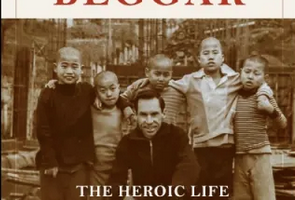 BOOK REVIEW: A true American hero who exchanged the cape for the collar: Fr. Aloysius Schwartz

The only challenge in reading a compelling new biography of Fr. Aloysius Schwartz, a Washington, D.C. native—entitled Priest and Beggar: The Heroic Life of Venerable Fr. Aloysius Schwartz— is that it seems to transcend reality at times and bring the reader into the realm of mythical superheroes.

However, in reading we learn that Aloysius was himself inspired to become a Catholic priest by reading superhero comics and listening to a Catholic nun, his aunt.

In 1957, a priest at 27 years of age, he requested to be sent to South Korea in the wake of the Korean War to dedicate himself to serving the poorest of the poor.

Aloysius would visit the United States many times, but he would never return permanently. His bones remain in Cavite, the Philippines, at the house of one of the religious congregations he founded.

Just a few months into his priesthood, Fr. Aloysius stepped off the train in Seoul into a scene that resembled a dystopian film.

Squatters with blank stares picked through hills of garbage. Orphaned children lay on the streets like leftover war shrapnel. The scenes of suffering pierced him.

He ultimately decides to live among the poor, in a shack, with no water and surrounded by rats.

Nonetheless, Schwartz managed to raise millions of dollars to change the lives of Korean poor by founding orphanages, hospitals, hospices, clinics, schools, and the Sisters of Mary, a Korean religious order dedicated to serving the sick and the poor. 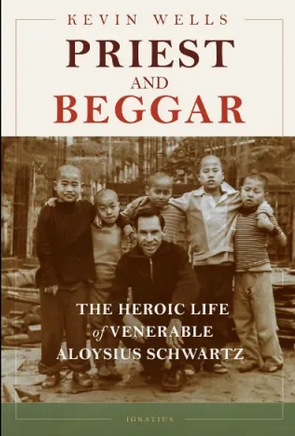 Wells does a great job at not missing all the aspects of this multifaceted priest, who was ridiculed by some of the local clergy and who stared down corruption, slander, persecution, and death for the sake of God’s poor.

“What Father Al managed to do is beyond the pale,” said Schwartz’s longtime collaborator Monsignor James Golasinski. “He was the boldest man I ever knew. He feared nothing.”

Driven to excel, for God

Fr. Schwartz was a man of great joy and humor, and an avid runner who loved organizing—and running—full-course marathons in Korea.

He also developed a deep devotion to Our Lady of the Poor, a little-known Marian devotion which originated in the Church-approved apparitions of Banneux, Belgium in 1933, and which were approved by the Holy See in 1949.

At the peak of his ministry, Fr. Schwartz was diagnosed with Lou Gehrig’s disease.

By the time of his death in 1992, his work with the Sisters of Mary had spread to the Philippines and Mexico; since then, the Sisters have founded Boystown and Girlstown communities across Central and South America, as well as in Tanzania, Africa.

Father Schwartz died calling out to his beloved Mary, the Virgin of the Poor, saying, “All praise, honor, and glory for anything good accomplished in my life goes to her and to her alone.” Schwartz was declared a Servant of God by Pope Francis in 2015.

The book, which includes 16 pages of photos, is highly recommended to anyone looking for inspiration, joy, fun, and a little embarrassment about the many things we could do for our personal holiness and for those most in need.

Article has been slightly edited by CBJ editor.