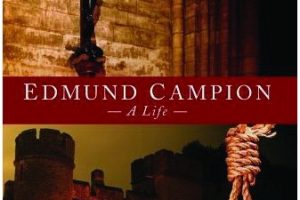 Penned by famed English writer Evelyn Waugh, this book is so well-written and historically accurate as to make the saint (and the times in which he lived) jump from the page and come alive before you.  If you read only one book this year, consider this one!


Evelyn Waugh presents his biography of St. Edmund Campion, the Elizabethan poet, scholar and gentleman who became the haunted, trapped and murdered priest, as “a simple, perfectly true story of heroism and holiness.”

But it is written with a novelist’s eye for the engaging the reader in a compelling story, a true story in this case, with all the elegance of a master of English prose.

From the years of success as an Oxford scholar, to entry into the newly founded Society of Jesus (Jesuits) and a professorship in Prague, Campion’s life was an inexorable progress toward a doomed mission to England. There followed pursuit, betrayal, a spirited defense of loyalty to the Queen, who had been a friend, and a horrifying martyr’s death at Tyburn.