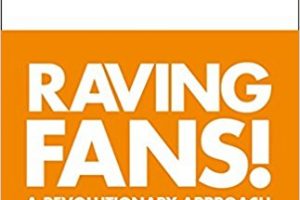 Raving Fans: A revolutionary Approach to Customer Service, by Ken Blanchard and Sheldon Bowles (1993, William Morrow and Company) is a simple and satisfying morsel of sage business advice echoing Catholic economic and moral principles of subsidiary, self-surrender and charity.

Written as a fast-moving fable, resulting in a simple, quick read, typical of Blanchard’s style, this pint-sized business book is exceptional in its delivery. The authors engage the reader immediately by dumping him in the midst of a newly advanced manager’s mind-spinning panic as he takes over the responsibilities that three others have failed to execute effectively before him. The company president points the new manager in the direction of examining customer service and makes it clear that “customer service” includes more breadth and depth than most people realize.

A sense of overwhelming panic sets in quickly after.  But not to worry. That’s where an un-typical, golf-loving Fairy Godmother enters and the rest is sheer, common sense (but often overlooked) enlightenment. In the course of reading the book, Blanchard and Bowles deliver three — yes, only three — principles that have already been proven to transform anyone’s customers into what they call “raving fans.” Readers learn the distinction between “satisfied customers” and “raving fans.”

Anyone in business knows they want the latter! I don’t want to give the three principles away.  But I can tell you that if you care about improving your customer base or customer loyalty, or if you want to sell more in a down economy, embrace the principles of this quick little book!  You’ll find yourself enjoying work AND your customers more than ever, and you’ll be making a difference for the good in the lives of others, including employees!  Can’t beat that! —ed.