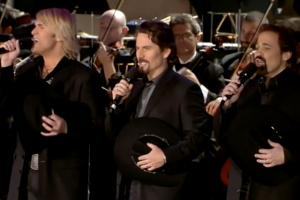 More about The Texas Tenors, from Wikipedia (including their footnote references):

The Texas Tenors are a three-time Emmy Award-winning classical crossover, trio vocal group formed in 2009 by country singer JC Fisher, pop singer Marcus Collins and opera singer John Hagen. They were a top four finalist in the fourth season of America’s Got Talent, making them the highest ranking vocal group in the show’s history.[1]

In 2013, The trio filmed their first PBS special with The Phoenix Symphony, performing songs from their second album You Should Dream. Along with being one of only two acts from America’s Got Talent (The Texas Tenors and Jackie Evancho) to star in their own television special for PBS, The Texas Tenors achieved another milestone in 2014 when they were honored with five Emmy Awards nominations and three wins for the self-produced special. The group also supports many charitable organizations.[2]

The group has performed more than 1300 concerts in over 20 countries including Great Britain and China. In August 2017 The Texas Tenors premiered their second PBS special and on September 8, 2017, released their third studio album of the same name, Rise, which debuted at #1 on the Billboard Classical Albums Chart, #1 Heatseeker New Artist Chart and #22 Top Current Albums resulting in the group’s highest charting positions and most successful sales week ever.[3]

In 2018, the trio released A Collection of Broadway & American Classics exclusively at their live concerts and through their website at the request of their fan club. Without distribution or a national campaign, the album debuted at #1 on the Billboard Classical Albums Chart and spent 10 weeks in the top 10.[4]   . . .