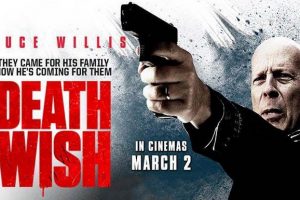 Bruce Willis isn’t back, but at least he’s trying. Alas, the same cannot be said for director Eli Roth.
When Scott Free Studios and Metro-Goldwyn-Mayer gave Death Wish the green light, studio heads could never have known that it would arrive at a particularly sensitive political moment in America’s national conversation. Originally scheduled to drop in November 2017 before being pushed back to March 2018, the film has been released smack in the middle of the post-Parkland gun control debate, and as such it is improbable that Roth’s remake of Michael Winner’s 1974 cult-classic of the same name will be evaluated on its own merits (meager though they are). While this timing is unfortunate, it is far from this project’s only problem.

As with the 1974 original, as well as the novel on which that film was based, the plot here is straightforward enough: Mild-mannered upper-middle-class man Paul Kersey, (Bruce Willis, filling the role famously played by Charles Bronson in the original) leads a peaceful life until a violent act is perpetrated on his family. Devastated by his loss and despairing of any possibility that the police will bring the criminals to justice, he takes matters into his own hands and commences a bloody hunt that expands into a one-man war against crime itself. A doctor by trade, Kersey discovers he has a talent for taking lives as well as saving them, and donning a simple hoodie in disguise, he soon applies the tools of his newfound calling on the crime-ridden streets of Chicago.

For all the violence on display, Paul Kersey and his family are portrayed wholesomely, though Elisabeth Shue and Camila Morrone aren’t given much to work with as Kersey’s wife and daughter, respectively. Bruce Willis brings a passable performance as a shy everyman to the early proceedings, and the always-watchable Vincent D’Onofrio (Daredevil, Jurassic World) shows some potential as Kersey’s less-fortunate older brother.
Eli Roth made his name in the horror and grindhouse genres with low-budget fare such as Cabin Fever (2002), Hostel (2005), and more recently in The Green Inferno (2013), none of which make for pleasant viewing due to their boundary-pushing violence. In Death Wish he offers up a surprisingly restrained film by comparison, although certain victims of Kersey’s lust for justice undoubtedly meet grislier ends than others. But while Roth clearly has a taste for savagery in his stories, his contribution here is little more than a retread of familiar territory, bound to leave even some devoted fans of the Death Wish franchise unsatisfied.

The screenplay is credited to Joe Carnahan (The Grey), who was once also set to direct the film, but who parted ways with the producers due to creative differences. Based on his body of work, we can reasonably conclude that Carnahan’s vision would have featured a deeper exploration of the moral ramifications of Kersey’s vigilantism. As it is, we are left to wonder what questions a more serious movie would have pondered: Would Carnahan’s version of Kersey have been driven into a spiritual crisis out of guilt for his actions? Or might he instead have been enraptured by the sudden celebrity bestowed on him by citizens desperate for a gun-toting hero?

All creative and thematic deficits aside, Death Wish will easily satisfy audiences searching for a by-the-numbers revenge flick, and any self-respecting Bruce Willis fan who discovers it whilst channel-surfing two or three years hence will find it at least a guilty pleasure. But in an age dominated by the staggering inventiveness of such character-driven street-level action flicks as John Wick and The Equalizer, this generic offering just isn’t going to cut it.

Death Wish is Rated R for strong bloody violence, and language throughout.