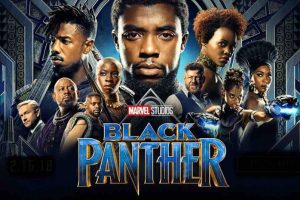 With a global box office draw topping an estimated $700 million at the time of this writing, Black Panther is the rare superhero movie that bursts the banks of its genre to become an undisputed cultural phenomenon.

Directed by Ryan Coogler (Creed, Fruitvale Station) and produced under the juggernaut brand of Marvel Studios, the film has racked up an impressive number of records in the weeks since its release. To date, it has claimed the title of highest-rated superhero film of all time by professional movie critics, sold the most presale tickets of any superhero film, smashed the February opening-weekend box office record previously held by Deadpool (2016), accumulated the largest opening weekend box office total for a film directed by an African-American, and now holds the all-time record for Monday ticket sales.

The film’s plot picks up soon after the conclusion of another Marvel Cinematic Universe (MCU) franchise entry, the critically-lauded Captain America: Civil War. Mourning the death of his father, Prince T’Challa (Chadwick Boseman) returns home to the hidden African nation of Wakanda to take his place on the throne. But when a villainous group with knowledge of Wakanda’s secrets suddenly appears, T’Challa not only faces a challenge to his kingship, but must decide what role his country should play on the world stage. At the heart of this struggle is Wakanda’s most precious resource: vibranium, a mineral with almost supernatural properties that crashed to earth via meteorite millions of years ago, laying the foundation for the country’s technological advancements.

Part sequel, part origin story, and cast in the various molds of superhero lore, African mythology, and a dash of James Bond, Black Panther is a rather different beast from its counterparts in the MCU. It breaks from its predecessors by trading the safety of veiled symbolism for a straightforwardly political plot. The result is a film that offers, on the one hand, the costumed antics that audiences have come to expect from this genre, and on the other, a surprisingly passionate commentary on such real-world concerns as tribalism, globalism, racial oppression, refugee crises, and isolationism.

Not since Iron Man (2008) saw Tony Stark don a metal suit to defend Afghani villagers from marauding Taliban-look-alikes has Marvel Studios so boldly walked the tightrope between escapist comic book realms and our troubled reality – and for the most part, the risk pays off. Besides having a well-structured script and a steady director’s hand, this success is owed in large part to the impressive cast. Relative newcomer Letitia Wright plays Shuri, T’Challa’s kid sister and head of Wakanda’s technology development. Academy Award-winner Lupita Nyong’o brings to life a Wakandan spy and T’Challa’s old flame, Nakia. Winston K. Duke and Andy Serkis (you’ll remember him as Gollum from The Lord of the Rings) each have scene-stealing moments as Gorilla Tribe Chief M’Baku and as one of Wakanda’s would-be infiltrators, respectively.

But if there is one character who demonstrates why Black Panther has enjoyed such overwhelming success, it is that of Erik “Killmonger” Stevens (Michael B. Jordan, Creed), by now forever cemented as one of the MCU’s most well-developed and charismatic villains.  Unlike the overwhelming majority of antagonists in this series, Killmonger’s wickedness is matched by his brokenness. Viewers will find him oddly likable, even while they grimace at his radical politics and murderous tendencies. To say much more about him would spoil far too much of the movie, but suffice it to say that Michael B. Jordan delivers a charged, multi-dimensional performance that is more than worth the price of your ticket.

Alas, despite an almost unprecedented hype, Black Panther is unable to fully escape the strictures of the Marvel brand. Early action sequences such as a car chase in South Korea should be brimming with excitement, yet fail to elicit the anticipated thrills, their dramatic weight robbed in part by the fact that our heroes are far too powerful to be hurt in such pedestrian engagements. The showdown between T’Challa and Killmonger features surprisingly dated CGI at times, and the cheap veneer of green-screen technology in some scenes can distract from what is otherwise a beautifully-shot film. Pacing issues in the first hour result primarily from the built-in need to draw connections to the wider MCU franchise, leaving us wondering whether the film would perhaps have been more effective as a simple origin story.

Nor is the movie tonally flawless: An aggressive, out-of-place one-finger gesture in the first act will disappoint parents who come hoping for a family-friendly film (although not every parent will be troubled by said gesture’s inclusion, given the story’s mature themes).

Finally, it should be noted that Black Panther’s enormous hype is – in this reviewer’s humble opinion – disproportionate to the quality of the film itself. Topical issues aside, this is a superhero movie geared primarily towards teenagers. It is neither Shakespeare nor Christopher Nolan’s The Dark Knight, and those who approach it as such are bound to leave the theater wondering what all the fuss is about.

Despite a handful of shortcomings, Black Panther carves a space for itself by resisting the prevalent temptation of tentpole films to overload on comedic elements, opting instead (like last year’s terrific Wonder Woman) to take itself and its themes seriously, buoyed throughout by stellar performances and an original soundtrack that meshes harmoniously with what is at times a glorious portrayal of African scenery. Anticlimactic car chases aside, Black Panther is at its best when stripped of the familiar trappings of comic book storytelling and forcing us, like T’Challa, to take a hard look at real-world problems and, hopefully, to ponder what can be done to save not just the world, but also the angry, fatherless souls adrift on the peripheries of society.

Black Panther is rated PG-13 for prolonged sequences of action violence, and a brief rude gesture.