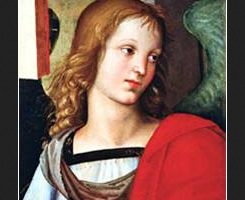 Why Beauty Matters—even at work, or does it?

With what art and beauty do you surround yourself during the biggest part of your weekday, at work?  It could be important.  Does it even matter?  Does Beauty matter?

Surely beauty matters to the human soul in subtle yet powerful, fundamental ways. Why else would God have been so attentive to it in creating all the universe?   Even atheists marvel at the splendor of the universe.  It softens them somehow.

Could beauty matter in the workplace?

I still remember the first time I attended a meeting in a certain Catholic businessman’s offices in southern California.  I noticed that while the outside architecture of the building was typical of the newer built business complexes in the region (one-story, plain and boxy). But as soon as you opened the , were different.  The interior lobby gave a sense of lofty ceiling, high-end flooring, purposeful elegance with a hint of Renaissance.  It was almost too much for the simplistic building.  But it silently spoke, to me, that something was different here.  It was not typical for the area. It was not minimalistic modern.

At this same office building, I observed that the myriad of typical cubby holes and office cubes that comprised the expansive main work space were surprisingly surrounded by walls with paintings and artwork that rivaled a nearby city’s museum.  It was an odd contrast.

I made it a point to sneak off and stroll around to observe the art after one meeting.  It was something any of the workers could have done as well, and probably did.  Later I learned the Catholic business owner employed an art expert/curator.  He also had a small chapel tucked away in the back of the open office space, not obvious to anyone visiting, yet well-known to anyone familiar with the principals and used daily by anyone who chose to conveniently attend Mass on-site.

In another office space, that of a seasoned, very kind, well-respected Los Angeles-based financial manager whose office included a team of under 10 and management of more than a billion dollars, the high-rise office space reflected an ordered down-to-earth sophistication, appreciation and elegance.  This man was also a devout Catholic and a generous Catholic higher education and pro-life philanthropist who loved music and opera. He was a hard worker who absolutely loved his work and his people.

On my first visit to this man’s office as a young professional, I was quite taken with a beautiful painting in his office.  It turned out to be a painting of a part of London after which he named his business.  It clearly inspired him, as did an image of a marlin in another part of his office (a nod to his biggest catch during his beloved deep sea adventures), and one or two religious pieces.  Simple. Beautiful. Important to him.

Over the years, I’ve noticed similar, perhaps more subtle but nonetheless boldly different and purposeful attention to art and beauty in offices and spread throughout an office space.

Not the generic.  The beautiful.

Without words, an attention to beauty in office(s) seems to me to shape the context of conversations, business decisions, to influence one’s sense of self-worth in light of a grander life purpose and perhaps even encourage virtue, for those who let in the beauty..

That’s why it was a delight to discover and now share with you this well thought-out article and video presentation penned by a Catholic poet and philosopher and published in First Things.

An accomplished Catholic poet and author answers the question:

First Things—Contemporary culture has discarded the concept of beauty in both art and philosophy. It is not a word much used nowadays, even by art critics, except ironically.  But the absence of beauty as a positive concept has left a hole in our thinking—not only in art and philosophy but also in education, politics, worship, and civic life. And its absence has doomed much of what we do in the public sector to failure.

In a strikingly illustrated talk, poet Dana Gioia examines the idea of Beauty in both its secular and sacred dimensions. He not only defines beauty but shows how it helps us better understand ourselves and the world. Ultimately, he demonstrates that the rehabilitation of beauty as both a concept and a value is necessary to rebuild our culture, our churches, and society.

Dana Gioia is an internationally acclaimed and award-winning poet. Former Chairman of the National Endowment for the Arts, Gioia is a native Californian of Italian and Mexican descent. He received a BA and an MBA from Stanford University and an MA in Comparative Literature from Harvard University. Gioia has published five full-length collections of poetry, as well as eight chapbooks. His poetry collection, Interrogations at Noon, won the 2002 American Book Award. Gioia is an influential critic as well. His 1991 volume Can Poetry Matter?, which was a finalist for the National Book Critics Circle award, is credited with helping to revive the role of poetry in American public culture. In 2014 he won the Aiken-Taylor Award for lifetime achievement in American poetry.