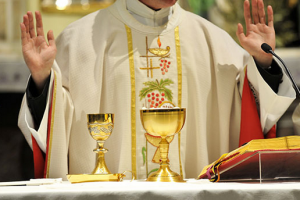 The sermon we heard last Sunday was so candid it took our breath away. By the end of Fr. Geoffrey Baraan’s second sentence, the uncomfortable pew twitching at his initial mention of clergy abuse and the recently publicized list of priest predators in the Diocese of Oakland had given way to a stillness so complete you could have heard a pin drop. Literally.

We in the pew didn’t move a muscle, didn’t hardly breath, for the next 20 minutes.

It was a horrific story.

And if you were to meet or get to know this outgoing pastor, who is much beloved among parishioners of all the parishes he’s served, you’d find no trace of the private nightmare he endured as a seminarian during his Pastoral Year.

The Pastoral Year is the year in which a seminarian serves at a parish to learn the ropes first-hand, and also to further test his own vocation as a diocesan priest.

Clearly it was difficult for Fr. Geoffrey to share what he experienced while serving at an Oakland parish many, many years ago. But he continued anyway. He was on a mission last Sunday.

This pastor knows well the power, the importance, and the desperate need for those in his care to face the ugly reality of clergy abuse full-on. He knows the power that comes from praying without ceasing, not only for victims of clergy sex abuse, but also for the abusers and for those in authority who allow it to continue.

He also knows the power of forgiveness, a forgiveness forged during his own journey to full recovery through years of counseling, relentless prayer, and great love of Christ.

Given ongoing headlines, Cardinal McCarrick’s laicization, the U.S. Bishops’ thwarted attempt to get at the root of the problem last Fall, the release of hundreds of “credible” priest abuser names from many dioceses, and last week’s Vatican Summit on Abuse, Sunday’s sermon was beyond relevant.

In his sermon, Fr. Geoffrey described his experience as “so shocking,” “horrific,” “frightening”… “not knowing what to do or where to turn”… “feeling completely helpless.”

“it’s hard to put into words,” he continued… the ongoing shock, dread, paralyzing fear, and the feeling of utter helplessness.

Keep in mind: This victim of clergy abuse was not a teenager. Not even a young boy. He was an adult. A seminarian.

His ordeal went on for days, then weeks and into months.

Until one night he fled.

He knew what was coming and that one night he escaped—still in fear—to his parents’ house several cities away.

Before that night, this future priest had endured the predatory torment of his priestly abuser in excruciating secret and silence. But no more.

It gets worse before it gets better

As a seminarian, Fr. Geoffrey at the time revealed to his parents, and then to the parish pastor, what the assistant parish priest was doing. He told them everything.

Here’s the kicker, and it goes to the heart of what last week’s Vatican Summit on Abuse was supposed to address.

Upon hearing the young man’s story, the response of the pastor was: “Oh, he’s at it again.”

He’s at it again? Are you kidding?! The seminarian victim was angry. How could such a predator be let loose to repeat his unholy behavior and actions?! How could he be allowed to present himself as a trusted priest, no less!

Sexual abuse is a crime.

No empathy for the young man who had endured months of serious abuse by a priest he trusted.

Instead, only clear admission that nothing had been done about this predator before. Not by the bishop at the time. Not by the pastor at the time. I suspect many in the pews wondered, as did I, just how many times the “situation” had been passed down the line, so to speak. After all, in dioceses of Los Angeles and Boston the can-kicking down the road was practically legendary.

We in the pew knew that this first-hand story, delivered by someone we knew well, was genuine. It was real.

We had been given a clear glimpse into the depth of evil the church leaders must root out, with God’s grace.

Hearing this one story, there is no question that rooting out such evil will take an equal or greater amount of collective courage, candor and prayer. There is no room in this battle for the faint of heart.

The sermon didn’t end there, thankfully.

The pastor then recounted one of the greatest joys of his priesthood happened while he was pastor at a different parish, in Antioch, California.

At that parish—as the direct result of this pastor’s private conversation with a very angry man, a SNAP (Survivors Network of those Abused by Priests) activist who had been abused as a young teen at the same Antioch parish 16 years ago — this angry man was completely changed. A great burden lifted from his shoulders. He found hope and a fresh path to take him back home.

“It was my great privilege,” recounted Fr. Geoffrey, “to welcome this man back into the Church, after he had been away for 16 years.”

Who else could God have used to open the heart of one so abused and rightfully angry, and for so many years?

Few priests could fully understand the depth of this victim’s lingering pain. Few could meet justified anger with the words ‘I know because I was there too.’

There are no further words needed. No resistance. Victim to victim. Shared understanding, yet more.

When such a priest talks about his own path to recovery and to life-transforming, profound forgiveness (not forgetfulness, but forgiveness), miracles happen.

The account of St. Paul’s early transition came to mind: “And immediately there fell from his eyes something like scales, and he regained his sight, and he got up and was baptized;” (Acts 9:18)

Thank you Fr. Geoffrey for reminding us, in your personal story, to be relentless in doing our part to root out the heart of the clergy abuse problem. To leave no stone unturned, as befits our vocation in life. One thing for sure, we can all pray with more focus and vigor for an end to this crime .

And, we can respectfully encourage our bishops and church leaders to persevere in order to achieve a genuine uprooting of the evil hidden in plain sight in our priesthood—to persevere in truth, regardless of any hype and mischaracterization and in-house rhetoric that may threaten to obscure the way.

This is an all-out battle for souls!

FOLLOW UP NOTE:  Fr. Geoffrey Baraan, who does not know me other than to say “hi” to a passing face, gave permission to include his name in this article. He also shared with me, via email, that because of his homily last Sunday, many have approached him, wanting to sit down and talk with him. They found solace and comfort in his story.