Monday of the 33rd Week in Ordinary Time 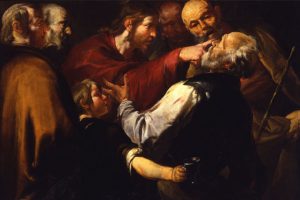 
1:1 The revelation of Jesus Christ, which God gave him to show to his servants what must soon take place; and he made it known by sending his angel to his servant John, 2 who bore witness to the word of God and to the testimony of Jesus Christ, even to all that he saw. 3 Blessed is he who reads aloud the words of the prophecy, and blessed are those who hear, and who keep what is written therein; for the time is near. 4 John to the seven churches that are in Asia: Grace to you and peace from him who is and who was and who is to come, and from the seven spirits who are before his throne, 2:1 “To the angel of the church in Ephesus write: `The words of him who holds the seven stars in his right hand, who walks among the seven golden lampstands. 2 I know your works, your toil and your patient endurance, and how you cannot bear evil men but have tested those who call themselves apostles but are not, and found them to be false; 3 I know you are enduring patiently and bearing up for my name’s sake, and you have not grown weary. 4 But I have this against you, that you have abandoned the love you had at first. 5 Remember then from what you have fallen, repent and do the works you did at first. If not, I will come to you and remove your lampstand from its place, unless you repent.'”


1 Blessed is the man who walks not in the counsel of the wicked, nor stands in the way of sinners, nor sits in the seat of scoffers; 2 but his delight is in the law of the LORD, and on his law he meditates day and night. 3 He is like a tree planted by streams of water, that yields its fruit in its season, and its leaf does not wither. In all that he does, he prospers. 4 The wicked are not so, but are like chaff which the wind drives away. 6 for the LORD knows the way of the righteous, but the way of the wicked will perish.


35 As he drew near to Jericho, a blind man was sitting by the roadside begging; 36 and hearing a multitude going by, he inquired what this meant. 37 They told him, “Jesus of Nazareth is passing by.” 38 And he cried, “Jesus, Son of David, have mercy on me!” 39 And those who were in front rebuked him, telling him to be silent; but he cried out all the more, “Son of David, have mercy on me!” 40 And Jesus stopped, and commanded him to be brought to him; and when he came near, he asked him, 41 “What do you want me to do for you?” He said, “Lord, let me receive my sight.” 42 And Jesus said to him, “Receive your sight; your faith has made you well.” 43 And immediately he received his sight and followed him, glorifying God; and all the people, when they saw it, gave praise to God.

Reflection for the day: “Only those who have experienced the solitude and the silence of the wilderness can know the benefit and divine joy they bring to those who love them.” — St. Bruno 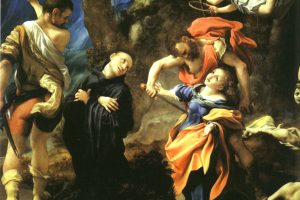