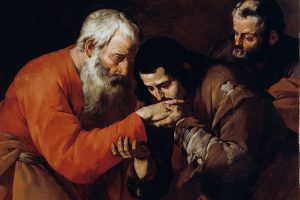 
7 And the LORD said to Moses, “Go down; for your people, whom you brought up out of the land of Egypt, have corrupted themselves; 8 they have turned aside quickly out of the way which I commanded them; they have made for themselves a molten calf, and have worshiped it and sacrificed to it, and said, `These are your gods, O Israel, who brought you up out of the land of Egypt!'” 9 And the LORD said to Moses, “I have seen this people, and behold, it is a stiff-necked people; 10 now therefore let me alone, that my wrath may burn hot against them and I may consume them; but of you I will make a great nation.” 11 But Moses besought the LORD his God, and said, “O LORD, why does thy wrath burn hot against thy people, whom thou hast brought forth out of the land of Egypt with great power and with a mighty hand? 13 Remember Abraham, Isaac, and Israel, thy servants, to whom thou didst swear by thine own self, and didst say to them, `I will multiply your descendants as the stars of heaven, and all this land that I have promised I will give to your descendants, and they shall inherit it for ever.'” 14 And the LORD repented of the evil which he thought to do to his people.


1 Have mercy on me, O God, according to thy steadfast love; according to thy abundant mercy blot out my transgressions. 2 Wash me thoroughly from my iniquity, and cleanse me from my sin! 10 Create in me a clean heart, O God, and put a new and right spirit within me. 11 Cast me not away from thy presence, and take not thy holy Spirit from me. 15 O Lord, open thou my lips, and my mouth shall show forth thy praise. 17 The sacrifice acceptable to God is a broken spirit; a broken and contrite heart, O God, thou wilt not despise.


12 I thank him who has given me strength for this, Christ Jesus our Lord, because he judged me faithful by appointing me to his service, 13 though I formerly blasphemed and persecuted and insulted him; but I received mercy because I had acted ignorantly in unbelief, 14 and the grace of our Lord overflowed for me with the faith and love that are in Christ Jesus. 15 The saying is sure and worthy of full acceptance, that Christ Jesus came into the world to save sinners. And I am the foremost of sinners; 16 but I received mercy for this reason, that in me, as the foremost, Jesus Christ might display his perfect patience for an example to those who were to believe in him for eternal life. 17 To the King of ages, immortal, invisible, the only God, be honor and glory for ever and ever. Amen.


1 Now the tax collectors and sinners were all drawing near to hear him. 2 And the Pharisees and the scribes murmured, saying, “This man receives sinners and eats with them.” 3 So he told them this parable: 4 “What man of you, having a hundred sheep, if he has lost one of them, does not leave the ninety-nine in the wilderness, and go after the one which is lost, until he finds it? 5 And when he has found it, he lays it on his shoulders, rejoicing. 6 And when he comes home, he calls together his friends and his neighbors, saying to them, `Rejoice with me, for I have found my sheep which was lost.’ 7 Just so, I tell you, there will be more joy in heaven over one sinner who repents than over ninety-nine righteous persons who need no repentance. 8 Or what woman, having ten silver coins, if she loses one coin, does not light a lamp and sweep the house and seek diligently until she finds it? 9And when she has found it, she calls together her friends and neighbors, saying, `Rejoice with me, for I have found the coin which I had lost.’ 10 Just so, I tell you, there is joy before the angels of God over one sinner who repents.” 11 And he said, “There was a man who had two sons; 12 and the younger of them said to his father, `Father, give me the share of property that falls to me.’ And he divided his living between them. 13 Not many days later, the younger son gathered all he had and took his journey into a far country, and there he squandered his property in loose living. 14 And when he had spent everything, a great famine arose in that country, and he began to be in want. 15 So he went and joined himself to one of the citizens of that country, who sent him into his fields to feed swine. 16 And he would gladly have fed on the pods that the swine ate; and no one gave him anything. 17 But when he came to himself he said, `How many of my father’s hired servants have bread enough and to spare, but I perish here with hunger! 18 I will arise and go to my father, and I will say to him, “Father, I have sinned against heaven and before you; 19 I am no longer worthy to be called your son; treat me as one of your hired servants.”‘ 20 And he arose and came to his father. But while he was yet at a distance, his father saw him and had compassion, and ran and embraced him and kissed him. 21 And the son said to him, `Father, I have sinned against heaven and before you; I am no longer worthy to be called your son.’ 22 But the father said to his servants, `Bring quickly the best robe, and put it on him; and put a ring on his hand, and shoes on his feet; 23 and bring the fatted calf and kill it, and let us eat and make merry; 24 for this my son was dead, and is alive again; he was lost, and is found.’ And they began to make merry. 25 Now his elder son was in the field; and as he came and drew near to the house, he heard music and dancing. 26 And he called one of the servants and asked what this meant. 27 And he said to him, `Your brother has come, and your father has killed the fatted calf, because he has received him safe and sound.’ 28 But he was angry and refused to go in. His father came out and entreated him, 29 but he answered his father, `Lo, these many years I have served you, and I never disobeyed your command; yet you never gave me a kid, that I might make merry with my friends. 30 But when this son of yours came, who has devoured your living with harlots, you killed for him the fatted calf!’ 31 And he said to him, `Son, you are always with me, and all that is mine is yours. 32 It was fitting to make merry and be glad, for this your brother was dead, and is alive; he was lost, and is found.'”

Reflection for the day: “How is it possible to commit acts of such savage cruelty? The human heart has depths from which schemes of unheard-of ferocity sometimes emerge, capable of destroying in a moment the normal daily life of a people. But faith comes to our aid at these times when words seem to fail. Christ’s word is the only one that can give a response to the questions which trouble our spirit. Even if the forces of darkness appear to prevail, those who believe in God know that evil and death do not have the final say. Christian hope is based on this truth; at this time our prayerful trust draws strength from it.” — Pope St. John Paul II (in response to the September 11th terrorist attacks)