Wednesday of the 15th Week in Ordinary Time 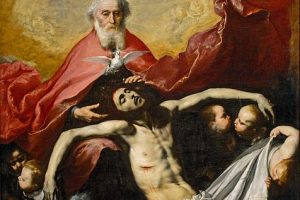 
5 Ah, Assyria, the rod of my anger, the staff of my fury! 6 Against a godless nation I send him, and against the people of my wrath I command him, to take spoil and seize plunder, and to tread them down like the mire of the streets. 7 But he does not so intend, and his mind does not so think; but it is in his mind to destroy, and to cut off nations not a few; 13 For he says: “By the strength of my hand I have done it, and by my wisdom, for I have understanding; I have removed the boundaries of peoples, and have plundered their treasures; like a bull I have brought down those who sat on thrones. 14 My hand has found like a nest the wealth of the peoples; and as men gather eggs that have been forsaken so I have gathered all the earth; and there was none that moved a wing, or opened the mouth, or chirped.” 15 Shall the axe vaunt itself over him who hews with it, or the saw magnify itself against him who wields it? As if a rod should wield him who lifts it, or as if a staff should lift him who is not wood! 16 Therefore the Lord, the LORD of hosts, will send wasting sickness among his stout warriors, and under his glory a burning will be kindled, like the burning of fire.


5 They crush thy people, O LORD, and afflict thy heritage. 6 They slay the widow and the sojourner, and murder the fatherless; 7 and they say, “The LORD does not see; the God of Jacob does not perceive.” 8 Understand, O dullest of the people! Fools, when will you be wise? 9 He who planted the ear, does he not hear? He who formed the eye, does he not see? 10 He who chastens the nations, does he not chastise? He who teaches men knowledge, 14 For the LORD will not forsake his people; he will not abandon his heritage; 15 for justice will return to the righteous, and all the upright in heart will follow it.


25 At that time Jesus declared, “I thank thee, Father, Lord of heaven and earth, that thou hast hidden these things from the wise and understanding and revealed them to babes; 26 yea, Father, for such was thy gracious will. 27 All things have been delivered to me by my Father; and no one knows the Son except the Father, and no one knows the Father except the Son and any one to whom the Son chooses to reveal him.”

Reflection for the day: “In all your deeds and words, you should look upon this Jesus, as your model. Do so, whether you are walking or keeping silence, or speaking, whether you are alone or with others. He is perfect and thus, you will be, not only irreprehensible but praiseworthy.” — St. Bonaventure