The Memorial of the Immaculate Heart of the Blessed Virgin Mary 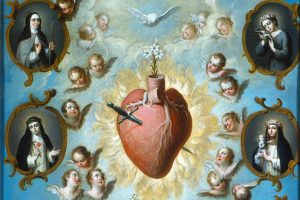 
2 The Lord has destroyed without mercy all the habitations of Jacob; in his wrath he has broken down the strongholds of the daughter of Judah; he has brought down to the ground in dishonor the kingdom and its rulers. 10 The elders of the daughter of Zion sit on the ground in silence; they have cast dust on their heads and put on sackcloth; the maidens of Jerusalem have bowed their heads to the ground. 11 My eyes are spent with weeping; my soul is in tumult; my heart is poured out in grief because of the destruction of the daughter of my people, because infants and babes faint in the streets of the city. 12 They cry to their mothers, “Where is bread and wine?” as they faint like wounded men in the streets of the city, as their life is poured out on their mothers’ bosom. 13 What can I say for you, to what compare you, O daughter of Jerusalem? What can I liken to you, that I may comfort you, O virgin daughter of Zion? For vast as the sea is your ruin; who can restore you? 14 Your prophets have seen for you false and deceptive visions; they have not exposed your iniquity to restore your fortunes, but have seen for you oracles false and misleading. 18 Cry aloud to the Lord! O daughter of Zion! Let tears stream down like a torrent day and night! Give yourself no rest, your eyes no respite! 19 Arise, cry out in the night, at the beginning of the watches! Pour out your heart like water before the presence of the Lord! Lift your hands to him for the lives of your children, who faint for hunger at the head of every street.


1 O God, why dost thou cast us off for ever? Why does thy anger smoke against the sheep of thy pasture? 2 Remember thy congregation, which thou hast gotten of old, which thou hast redeemed to be the tribe of thy heritage! Remember Mount Zion, where thou hast dwelt. 3 Direct thy steps to the perpetual ruins; the enemy has destroyed everything in the sanctuary! 4 Thy foes have roared in the midst of thy holy place; they set up their own signs for signs. 5 At the upper entrance they hacked the wooden trellis with axes. 6 And then all its carved wood they broke down with hatchets and hammers. 7 They set thy sanctuary on fire; to the ground they desecrated the dwelling place of thy name. 20 Have regard for thy covenant; for the dark places of the land are full of the habitations of violence. 21 Let not the downtrodden be put to shame; let the poor and needy praise thy name.


41 Now his parents went to Jerusalem every year at the feast of the Passover. 42 And when he was twelve years old, they went up according to custom; 43 and when the feast was ended, as they were returning, the boy Jesus stayed behind in Jerusalem. His parents did not know it, 44 but supposing him to be in the company they went a day’s journey, and they sought him among their kinsfolk and acquaintances; 45 and when they did not find him, they returned to Jerusalem, seeking him. 46 After three days they found him in the temple, sitting among the teachers, listening to them and asking them questions; 47 and all who heard him were amazed at his understanding and his answers. 48 And when they saw him they were astonished; and his mother said to him, “Son, why have you treated us so? Behold, your father and I have been looking for you anxiously.” 49 And he said to them, “How is it that you sought me? Did you not know that I must be in my Father’s house?” 50 And they did not understand the saying which he spoke to them. 51 And he went down with them and came to Nazareth, and was obedient to them; and his mother kept all these things in her heart.

Reflection for the day: “The faults of children are not always imputed to the parents, especially when they have instructed them and given good example. Our Lord, in His wonderous Providence, allows children to break the hearts of devout fathers and mothers. Thus the decisions your children have made don’t make you a failure as a parent in God’s eyes. You are entitled to feel sorrow, but not necessarily guilt. Do not cease praying for your children; God’s grace can touch a hardened heart. Commend your children to the Immaculate Heart of Mary. When parents pray the Rosary, at the end of each decade they should hold the Rosary aloft and say to her, ‘With these beads bind my children to your Immaculate Heart’, she will attend to their souls.” — St. Louise de Marillac