Memorial of St. Anthony of Padua, Priest and Doctor of the Church 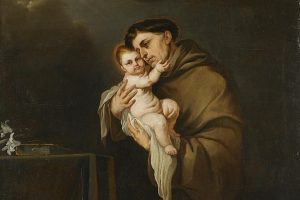 
1 Now Naboth the Jezre′elite had a vineyard in Jezre′el, beside the palace of Ahab king of Samar′ia. 2 And after this Ahab said to Naboth, “Give me your vineyard, that I may have it for a vegetable garden, because it is near my house; and I will give you a better vineyard for it; or, if it seems good to you, I will give you its value in money.” 3 But Naboth said to Ahab, “The Lord forbid that I should give you the inheritance of my fathers.” 4 And Ahab went into his house vexed and sullen because of what Naboth the Jezre′elite had said to him; for he had said, “I will not give you the inheritance of my fathers.” And he lay down on his bed, and turned away his face, and would eat no food. 5 But Jez′ebel his wife came to him, and said to him, “Why is your spirit so vexed that you eat no food?” 6 And he said to her, “Because I spoke to Naboth the Jezre′elite, and said to him, ‘Give me your vineyard for money; or else, if it please you, I will give you another vineyard for it’; and he answered, ‘I will not give you my vineyard.’” 7 And Jez′ebel his wife said to him, “Do you now govern Israel? Arise, and eat bread, and let your heart be cheerful; I will give you the vineyard of Naboth the Jezre′elite.” 8 So she wrote letters in Ahab’s name and sealed them with his seal, and she sent the letters to the elders and the nobles who dwelt with Naboth in his city. 9 And she wrote in the letters, “Proclaim a fast, and set Naboth on high among the people; 10 and set two base fellows opposite him, and let them bring a charge against him, saying, ‘You have cursed God and the king.’ Then take him out, and stone him to death.” 11 And the men of his city, the elders and the nobles who dwelt in his city, did as Jez′ebel had sent word to them. As it was written in the letters which she had sent to them, 12 they proclaimed a fast, and set Naboth on high among the people. 13 And the two base fellows came in and sat opposite him; and the base fellows brought a charge against Naboth, in the presence of the people, saying, “Naboth cursed God and the king.” So they took him outside the city, and stoned him to death with stones. 14 Then they sent to Jez′ebel, saying, “Naboth has been stoned; he is dead.” 15 As soon as Jez′ebel heard that Naboth had been stoned and was dead, Jez′ebel said to Ahab, “Arise, take possession of the vineyard of Naboth the Jezre′elite, which he refused to give you for money; for Naboth is not alive, but dead.” 16 And as soon as Ahab heard that Naboth was dead, Ahab arose to go down to the vineyard of Naboth the Jezre′elite, to take possession of it.


2 Hearken to the sound of my cry, my King and my God, for to thee do I pray. 3 O Lord, in the morning thou dost hear my voice; in the morning I prepare a sacrifice for thee, and watch. 4 For thou art not a God who delights in wickedness; evil may not sojourn with thee. 5 The boastful may not stand before thy eyes; thou hatest all evildoers. 6 Thou destroyest those who speak lies; the Lord abhors bloodthirsty and deceitful men. 7 But I through the abundance of thy steadfast love will enter thy house, I will worship toward thy holy temple in the fear of thee.


38 “You have heard that it was said, ‘An eye for an eye and a tooth for a tooth.’ 39 But I say to you, Do not resist one who is evil. But if any one strikes you on the right cheek, turn to him the other also; 40 and if any one would sue you and take your coat, let him have your cloak as well; 41 and if any one forces you to go one mile, go with him two miles. 42 Give to him who begs from you, and do not refuse him who would borrow from you.”

Reflection for the day: “Earthly riches are like the reed. Its roots are sunk in the swamp, and its exterior is fair to behold; but inside it is hollow. If a man leans on such a reed, it will snap off and pierce his soul.” — St. Anthony of Padua