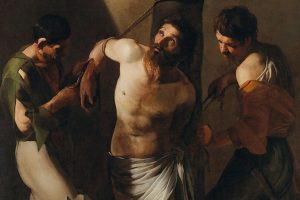 
9 Then came one of the seven angels who had the seven bowls full of the seven last plagues, and spoke to me, saying, “Come, I will show you the Bride, the wife of the Lamb.” 10 And in the Spirit he carried me away to a great, high mountain, and showed me the holy city Jerusalem coming down out of heaven from God, 11 having the glory of God, its radiance like a most rare jewel, like a jasper, clear as crystal. 12 It had a great, high wall, with twelve gates, and at the gates twelve angels, and on the gates the names of the twelve tribes of the sons of Israel were inscribed; 13 on the east three gates, on the north three gates, on the south three gates, and on the west three gates. 14 And the wall of the city had twelve foundations, and on them the twelve names of the twelve apostles of the Lamb.


10 All thy works shall give thanks to thee, O LORD, and all thy saints shall bless thee! 11 They shall speak of the glory of thy kingdom, and tell of thy power, 12 to make known to the sons of men thy mighty deeds, and the glorious splendor of thy kingdom. 13 Thy kingdom is an everlasting kingdom, and thy dominion endures throughout all generations. The LORD is faithful in all his words, and gracious in all his deeds. 17 The LORD is just in all his ways, and kind in all his doings. 18 The LORD is near to all who call upon him, to all who call upon him in truth.

Reflection for the day: “We must keep the eye of faith fixed on Jesus Christ who climbs the hill of Calvary loaded with his Cross, and as he toils painfully up the steep slope of Golgotha we should see him followed by an immense throng of souls carrying their own crosses and treading the same path. Oh, what a beautiful sight this is. Let us fix our mental gaze firmly on it. We see close behind Jesus our most holy Mother, who follows him perfectly, loaded with her own cross. Then comes the Apostles, Martyrs, Doctors, Virgins and Confessors. . .Jesus himself, despite all our unworthiness, has associated us with this beautiful company. We must make every effort to merge ourselves increasingly in these ranks and hasten with them along the road to Calvary. We should look to the end of the journey and not separate ourselves from this fine company; we must refuse to follow any other way than the one they tread.” – St. Pio of Pietrelcina