Thursday of the 14th Week in Ordinary Time 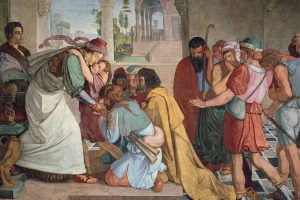 
44:18 Then Judah went up to him and said, “O my lord, let your servant, I pray you, speak a word in my lord’s ears, and let not your anger burn against your servant; for you are like Pharaoh himself. 19 My lord asked his servants, saying, `Have you a father, or a brother?’ 20 And we said to my lord, `We have a father, an old man, and a young brother, the child of his old age; and his brother is dead, and he alone is left of his mother’s children; and his father loves him.’ 21 Then you said to your servants, `Bring him down to me, that I may set my eyes upon him.’ 23 Then you said to your servants, `Unless your youngest brother comes down with you, you shall see my face no more.’ 24 When we went back to your servant my father we told him the words of my lord. 25 And when our father said, `Go again, buy us a little food,’ 26 we said, `We cannot go down. If our youngest brother goes with us, then we will go down; for we cannot see the man’s face unless our youngest brother is with us.’ 27 Then your servant my father said to us, `You know that my wife bore me two sons; 28 one left me, and I said, Surely he has been torn to pieces; and I have never seen him since. 29 If you take this one also from me, and harm befalls him, you will bring down my gray hairs in sorrow to Sheol.’ 45:1 Then Joseph could not control himself before all those who stood by him; and he cried, “Make every one go out from me.” So no one stayed with him when Joseph made himself known to his brothers. 2 And he wept aloud, so that the Egyptians heard it, and the household of Pharaoh heard it. 3 And Joseph said to his brothers, “I am Joseph; is my father still alive?” But his brothers could not answer him, for they were dismayed at his presence. 4 So Joseph said to his brothers, “Come near to me, I pray you.” And they came near. And he said, “I am your brother, Joseph, whom you sold into Egypt. 5 And now do not be distressed, or angry with yourselves, because you sold me here; for God sent me before you to preserve life.”


7 “And preach as you go, saying, `The kingdom of heaven is at hand.’ 8 Heal the sick, raise the dead, cleanse lepers, cast out demons. You received without paying, give without pay. 9 Take no gold, nor silver, nor copper in your belts, 10 no bag for your journey, nor two tunics, nor sandals, nor a staff; for the laborer deserves his food. 11 And whatever town or village you enter, find out who is worthy in it, and stay with him until you depart. 12 As you enter the house, salute it. 13 And if the house is worthy, let your peace come upon it; but if it is not worthy, let your peace return to you. 14 And if any one will not receive you or listen to your words, shake off the dust from your feet as you leave that house or town. 15 Truly, I say to you, it shall be more tolerable on the day of judgment for the land of Sodom and Gomor’rah than for that town.”

Reflection for the day: “Behold Jesus Christ crucified, who is the only foundation of our hope; He is our Mediator and Advocate; the victim and sacrifice for our sins. He is goodness and patience itself; His mercy is moved by the tears of sinners, and He never refuses pardon and grace to those who ask it with a truly contrite and humbled heart.” — St. Charles Borromeo