Thursday of the 8th Week in Ordinary Time 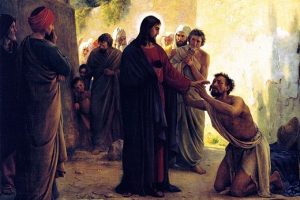 
15 I will now call to mind the works of the Lord, and will declare what I have seen. By the words of the Lord his works are done. 16 The sun looks down on everything with its light, and the work of the Lord is full of his glory. 17 The Lord has not enabled his holy ones to recount all his marvelous works, which the Lord the Almighty has established that the universe may stand firm in his glory. 18 He searches out the abyss, and the hearts of men, and considers their crafty devices. For the Most High knows all that may be known, and he looks into the signs of the age. 19 He declares what has been and what is to be, and he reveals the tracks of hidden things. 20 No thought escapes him, and not one word is hidden from him. 21 He has ordained the splendors of his wisdom, and he is from everlasting and to everlasting. Nothing can be added or taken away, and he needs no one to be his counselor. 22 How greatly to be desired are all his works, and how sparkling they are to see! 23 All these things live and remain for ever for every need, and are all obedient. 24 All things are twofold, one opposite the other, and he has made nothing incomplete. 25 One confirms the good things of the other, and who can have enough of beholding his glory?


2 Praise the LORD with the lyre, make melody to him with the harp of ten strings! 3 Sing to him a new song, play skilfully on the strings, with loud shouts. 4 For the word of the LORD is upright; and all his work is done in faithfulness. 5 He loves righteousness and justice; the earth is full of the steadfast love of the LORD. 6 By the word of the LORD the heavens were made, and all their host by the breath of his mouth. 7 He gathered the waters of the sea as in a bottle; he put the deeps in storehouses. 8 Let all the earth fear the LORD, let all the inhabitants of the world stand in awe of him! 9 For he spoke, and it came to be; he commanded, and it stood forth.


46 And they came to Jericho; and as he was leaving Jericho with his disciples and a great multitude, Bartimae’us, a blind beggar, the son of Timae’us, was sitting by the roadside. 47 And when he heard that it was Jesus of Nazareth, he began to cry out and say, “Jesus, Son of David, have mercy on me!” 48 And many rebuked him, telling him to be silent; but he cried out all the more, “Son of David, have mercy on me!” 49 And Jesus stopped and said, “Call him.” And they called the blind man, saying to him, “Take heart; rise, he is calling you.” 50 And throwing off his mantle he sprang up and came to Jesus. 51 And Jesus said to him, “What do you want me to do for you?” And the blind man said to him, “Master, let me receive my sight.” 52 And Jesus said to him, “Go your way; your faith has made you well.” And immediately he received his sight and followed him on the way.

Reflection for the day: “He who beholds Heaven with a pure eye, sees better the darkness of earth; for, although the latter seems to have some brilliancy, it disappears before the splendor of the heavens.” — St. Ignatius of Loyola