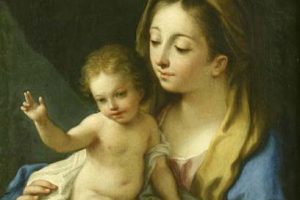 
9 But the Lord God called to the man, and said to him, “Where are you?” 10 And he said, “I heard the sound of thee in the garden, and I was afraid, because I was naked; and I hid myself.” 11 He said, “Who told you that you were naked? Have you eaten of the tree of which I commanded you not to eat?” 12 The man said, “The woman whom thou gavest to be with me, she gave me fruit of the tree, and I ate.” 13 Then the Lord God said to the woman, “What is this that you have done?” The woman said, “The serpent beguiled me, and I ate.” 14 The Lord God said to the serpent, “Because you have done this, cursed are you above all cattle, and above all wild animals; upon your belly you shall go, and dust you shall eat all the days of your life. 15 I will put enmity between you and the woman, and between your seed and her seed; he shall bruise your head, and you shall bruise his heel.” 20 The man called his wife’s name Eve, because she was the mother of all living.


1 On the holy mount stands the city he founded; 2 the Lord loves the gates of Zion more than all the dwelling places of Jacob. 3 Glorious things are spoken of you, O city of God. Selah 5 And of Zion it shall be said, “This one and that one were born in her”; for the Most High himself will establish her. 6 The Lord records as he registers the peoples, “This one was born there.” Selah 7 Singers and dancers alike say, “All my springs are in you.”


1 So the soldiers did this. But standing by the cross of Jesus were his mother, and his mother’s sister, Mary the wife of Clopas, and Mary Mag′dalene. 26 When Jesus saw his mother, and the disciple whom he loved standing near, he said to his mother, “Woman, behold, your son!” 27 Then he said to the disciple, “Behold, your mother!” And from that hour the disciple took her to his own home. 28 After this Jesus, knowing that all was now finished, said (to fulfil the scripture), “I thirst.” 29 A bowl full of vinegar stood there; so they put a sponge full of the vinegar on hyssop and held it to his mouth. 30 When Jesus had received the vinegar, he said, “It is finished”; and he bowed his head and gave up his spirit. 31 Since it was the day of Preparation, in order to prevent the bodies from remaining on the cross on the sabbath (for that sabbath was a high day), the Jews asked Pilate that their legs might be broken, and that they might be taken away. 32 So the soldiers came and broke the legs of the first, and of the other who had been crucified with him; 33 but when they came to Jesus and saw that he was already dead, they did not break his legs. 34 But one of the soldiers pierced his side with a spear, and at once there came out blood and water. 35 He who saw it has borne witness—his testimony is true, and he knows that he tells the truth—that you also may believe. 36 For these things took place that the scripture might be fulfilled, “Not a bone of him shall be broken.” 37 And again another scripture says, “They shall look on him whom they have pierced.”

Reflection for the day: “We know very well that the Blessed Virgin is Queen of heaven and earth, but she is more Mother than Queen.” — St. Therese of Lisieux