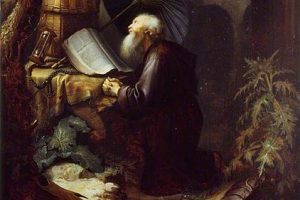 6 That night was made known beforehand to our fathers, so that they might rejoice in sure knowledge of the oaths in which they trusted. 7 The deliverance of the righteous and the destruction of their enemies were expected by thy people. 8 For by the same means by which thou didst punish our enemies thou didst call us to thyself and glorify us. 9 For in secret the holy children of good men offered sacrifices, and with one accord agreed to the divine law, that the saints would share alike the same things, both blessings and dangers; and already they were singing the praises of the fathers.

1 Now faith is the assurance of things hoped for, the conviction of things not seen. 2 For by it the men of old received divine approval. 8 By faith Abraham obeyed when he was called to go out to a place which he was to receive as an inheritance; and he went out, not knowing where he was to go. 9 By faith he sojourned in the land of promise, as in a foreign land, living in tents with Isaac and Jacob, heirs with him of the same promise. 10 For he looked forward to the city which has foundations, whose builder and maker is God. 11 By faith Sarah herself received power to conceive, even when she was past the age, since she considered him faithful who had promised. 12 Therefore from one man, and him as good as dead, were born descendants as many as the stars of heaven and as the innumerable grains of sand by the seashore. 13 These all died in faith, not having received what was promised, but having seen it and greeted it from afar, and having acknowledged that they were strangers and exiles on the earth. 14 For people who speak thus make it clear that they are seeking a homeland. 15 If they had been thinking of that land from which they had gone out, they would have had opportunity to return. 16 But as it is, they desire a better country, that is, a heavenly one. Therefore God is not ashamed to be called their God, for he has prepared for them a city. 17 By faith Abraham, when he was tested, offered up Isaac, and he who had received the promises was ready to offer up his only son, 18of whom it was said, “Through Isaac shall your descendants be named.” 19 He considered that God was able to raise men even from the dead; hence, figuratively speaking, he did receive him back.

1 Rejoice in the LORD, O you righteous! Praise befits the upright. 12 Blessed is the nation whose God is the LORD, the people whom he has chosen as his heritage! 18 Behold, the eye of the LORD is on those who fear him, on those who hope in his steadfast love, 19 that he may deliver their soul from death, and keep them alive in famine. 20 Our soul waits for the LORD; he is our help and shield. 21 Yea, our heart is glad in him, because we trust in his holy name. 22 Let thy steadfast love, O LORD, be upon us, even as we hope in thee.

32 “Fear not, little flock, for it is your Father’s good pleasure to give you the kingdom. 33 Sell your possessions, and give alms; provide yourselves with purses that do not grow old, with a treasure in the heavens that does not fail, where no thief approaches and no moth destroys. 34 For where your treasure is, there will your heart be also. 35 “Let your loins be girded and your lamps burning, 36 and be like men who are waiting for their master to come home from the marriage feast, so that they may open to him at once when he comes and knocks. 37 Blessed are those servants whom the master finds awake when he comes; truly, I say to you, he will gird himself and have them sit at table, and he will come and serve them. 38 If he comes in the second watch, or in the third, and finds them so, blessed are those servants! 39 But know this, that if the householder had known at what hour the thief was coming, he would not have left his house to be broken into. 40 You also must be ready; for the Son of man is coming at an unexpected hour.” 41 Peter said, “Lord, are you telling this parable for us or for all?” 42 And the Lord said, “Who then is the faithful and wise steward, whom his master will set over his household, to give them their portion of food at the proper time? 43 Blessed is that servant whom his master when he comes will find so doing. 44 Truly, I say to you, he will set him over all his possessions. 45 But if that servant says to himself, ‘My master is delayed in coming,’ and begins to beat the menservants and the maidservants, and to eat and drink and get drunk, 46 the master of that servant will come on a day when he does not expect him and at an hour he does not know, and will punish him, and put him with the unfaithful. 47 And that servant who knew his master’s will, but did not make ready or act according to his will, shall receive a severe beating. 48 But he who did not know, and did what deserved a beating, shall receive a light beating. Every one to whom much is given, of him will much be required; and of him to whom men commit much they will demand the more.”

Reflection for the day: “We are to love God for Himself, because of a twofold reason; nothing is more reasonable, nothing more profitable.” — St. Bernard of Clairvaux