Memorial of St. Ignatius of Loyola 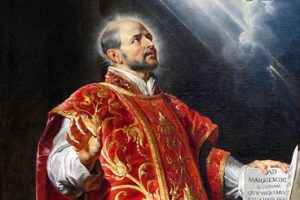 29 When Moses came down from Mount Sinai, with the two tables of the testimony in his hand as he came down from the mountain, Moses did not know that the skin of his face shone because he had been talking with God. 30 And when Aaron and all the people of Israel saw Moses, behold, the skin of his face shone, and they were afraid to come near him. 31 But Moses called to them; and Aaron and all the leaders of the congregation returned to him, and Moses talked with them. 32 And afterward all the people of Israel came near, and he gave them in commandment all that the LORD had spoken with him in Mount Sinai. 33 And when Moses had finished speaking with them, he put a veil on his face; 34 but whenever Moses went in before the LORD to speak with him, he took the veil off, until he came out; and when he came out, and told the people of Israel what he was commanded, 35 the people of Israel saw the face of Moses, that the skin of Moses’ face shone; and Moses would put the veil upon his face again, until he went in to speak with him.

Reflection for the day: “It is not hard to obey when we love the one whom we obey.” — St. Ignatius of Loyola 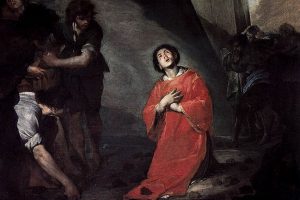 Monday of the 3rd Week of Easter
Daily Mass Readings »