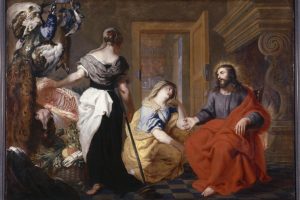 15 And Moses turned, and went down from the mountain with the two tables of the testimony in his hands, tables that were written on both sides; on the one side and on the other were they written. 16 And the tables were the work of God, and the writing was the writing of God, graven upon the tables. 17 When Joshua heard the noise of the people as they shouted, he said to Moses, “There is a noise of war in the camp.” 18 But he said, “It is not the sound of shouting for victory, or the sound of the cry of defeat, but the sound of singing that I hear.” 19 And as soon as he came near the camp and saw the calf and the dancing, Moses’ anger burned hot, and he threw the tables out of his hands and broke them at the foot of the mountain. 20 And he took the calf which they had made, and burnt it with fire, and ground it to powder, and scattered it upon the water, and made the people of Israel drink it. 21 And Moses said to Aaron, “What did this people do to you that you have brought a great sin upon them?” 22 And Aaron said, “Let not the anger of my lord burn hot; you know the people, that they are set on evil. 23 For they said to me, `Make us gods, who shall go before us; as for this Moses, the man who brought us up out of the land of Egypt, we do not know what has become of him.’ 24 And I said to them, ‘Let any who have gold take it off’; so they gave it to me, and I threw it into the fire, and there came out this calf.” 30 On the morrow Moses said to the people, “You have sinned a great sin. And now I will go up to the LORD; perhaps I can make atonement for your sin.” 31 So Moses returned to the LORD and said, “Alas, this people have sinned a great sin; they have made for themselves gods of gold. 32 But now, if thou wilt forgive their sin — and if not, blot me, I pray thee, out of thy book which thou hast written.” 33 But the LORD said to Moses, “Whoever has sinned against me, him will I blot out of my book. 34 But now go, lead the people to the place of which I have spoken to you; behold, my angel shall go before you. Nevertheless, in the day when I visit, I will visit their sin upon them.”

19 They made a calf in Horeb and worshiped a molten image. 20 They exchanged the glory of God for the image of an ox that eats grass. 21 They forgot God, their Savior, who had done great things in Egypt, 22 wondrous works in the land of Ham, and terrible things by the Red Sea. 23 Therefore he said he would destroy them — had not Moses, his chosen one, stood in the breach before him, to turn away his wrath from destroying them.

19 And many of the Jews had come to Martha and Mary to console them concerning their brother. 20 When Martha heard that Jesus was coming, she went and met him, while Mary sat in the house. 21 Martha said to Jesus, “Lord, if you had been here, my brother would not have died. 22 And even now I know that whatever you ask from God, God will give you.” 23 Jesus said to her, “Your brother will rise again.” 24 Martha said to him, “I know that he will rise again in the resurrection at the last day.” 25 Jesus said to her, “I am the resurrection and the life; he who believes in me, though he die, yet shall he live, 26 and whoever lives and believes in me shall never die. Do you believe this?” 27 She said to him, “Yes, Lord; I believe that you are the Christ, the Son of God, he who is coming into the world.”

Reflection for the day: “If obedience sends you to the kitchen, remember that the Lord walks among the pots and pans and that He will keep you in inward tasks and in outward ones, too.” — St. Teresa of Avila