Saturday of the 16th Week in Ordinary Time 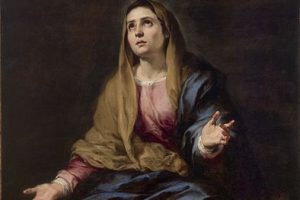 
3 Moses came and told the people all the words of the LORD and all the ordinances; and all the people answered with one voice, and said, “All the words which the LORD has spoken we will do.” 4 And Moses wrote all the words of the LORD. And he rose early in the morning, and built an altar at the foot of the mountain, and twelve pillars, according to the twelve tribes of Israel. 5 And he sent young men of the people of Israel, who offered burnt offerings and sacrificed peace offerings of oxen to the LORD. 6 And Moses took half of the blood and put it in basins, and half of the blood he threw against the altar. 7 Then he took the book of the covenant, and read it in the hearing of the people; and they said, “All that the LORD has spoken we will do, and we will be obedient.” 8 And Moses took the blood and threw it upon the people, and said, “Behold the blood of the covenant which the LORD has made with you in accordance with all these words.”


1 The Mighty One, God the LORD, speaks and summons the earth from the rising of the sun to its setting. 2 Out of Zion, the perfection of beauty, God shines forth. 5 “Gather to me my faithful ones, who made a covenant with me by sacrifice!” 6 The heavens declare his righteousness, for God himself is judge! [Selah] 14 Offer to God a sacrifice of thanksgiving, and pay your vows to the Most High; 15 and call upon me in the day of trouble; I will deliver you, and you shall glorify me.”


24 Another parable he put before them, saying, “The kingdom of heaven may be compared to a man who sowed good seed in his field; 25 but while men were sleeping, his enemy came and sowed weeds among the wheat, and went away. 26 So when the plants came up and bore grain, then the weeds appeared also. 27 And the servants of the householder came and said to him, ‘Sir, did you not sow good seed in your field? How then has it weeds?’ 28 He said to them, ‘An enemy has done this.’ The servants said to him, ‘Then do you want us to go and gather them?’ 29 But he said, ‘No; lest in gathering the weeds you root up the wheat along with them. 30 Let both grow together until the harvest; and at harvest time I will tell the reapers, Gather the weeds first and bind them in bundles to be burned, but gather the wheat into my barn.'”

Reflection for the day: “Most people today want a religion which suits the way they live, rather than the one which makes demands upon them. Religion thus becomes a luxury like an opera, not a responsibility like life.” — Venerable Fulton Sheen