Wednesday of the 16th Week in Ordinary Time 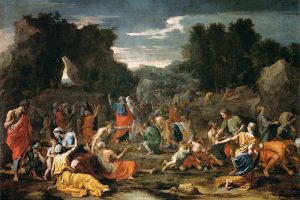 
18 They tested God in their heart by demanding the food they craved. 19 They spoke against God, saying, “Can God spread a table in the wilderness? 23 Yet he commanded the skies above, and opened the doors of heaven; 24 and he rained down upon them manna to eat, and gave them the grain of heaven. 25 Man ate of the bread of the angels; he sent them food in abundance. 26 He caused the east wind to blow in the heavens, and by his power he led out the south wind; 27 he rained flesh upon them like dust, winged birds like the sand of the seas; 28 he let them fall in the midst of their camp, all around their habitations.


1 That same day Jesus went out of the house and sat beside the sea. 2 And great crowds gathered about him, so that he got into a boat and sat there; and the whole crowd stood on the beach. 3 And he told them many things in parables, saying: “A sower went out to sow. 4 And as he sowed, some seeds fell along the path, and the birds came and devoured them. 5 Other seeds fell on rocky ground, where they had not much soil, and immediately they sprang up, since they had no depth of soil, 6 but when the sun rose they were scorched; and since they had no root they withered away. 7 Other seeds fell upon thorns, and the thorns grew up and choked them. 8 Other seeds fell on good soil and brought forth grain, some a hundredfold, some sixty, some thirty. 9 He who has ears, let him hear.”

Reflection for the day: “Someday we will thank God not only for what He gave us, but also for that which He refused.” — Venerable Fulton Sheen