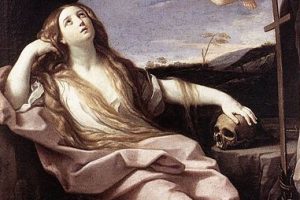 
1 O God, thou art my God, I seek thee, my soul thirsts for thee; my flesh faints for thee, as in a dry and weary land where no water is. 2 So I have looked upon thee in the sanctuary, beholding thy power and glory. 3 Because thy steadfast love is better than life, my lips will praise thee. 4 So I will bless thee as long as I live; I will lift up my hands and call on thy name. 5 My soul is feasted as with marrow and fat, and my mouth praises thee with joyful lips, 7 for thou hast been my help, and in the shadow of thy wings I sing for joy. 8 My soul clings to thee; thy right hand upholds me.


1 Now on the first day of the week Mary Mag’dalene came to the tomb early, while it was still dark, and saw that the stone had been taken away from the tomb. 2 So she ran, and went to Simon Peter and the other disciple, the one whom Jesus loved, and said to them, “They have taken the Lord out of the tomb, and we do not know where they have laid him.” 11 But Mary stood weeping outside the tomb, and as she wept she stooped to look into the tomb; 12 and she saw two angels in white, sitting where the body of Jesus had lain, one at the head and one at the feet. 13 They said to her, “Woman, why are you weeping?” She said to them, “Because they have taken away my Lord, and I do not know where they have laid him.” 14 Saying this, she turned round and saw Jesus standing, but she did not know that it was Jesus. 15 Jesus said to her, “Woman, why are you weeping? Whom do you seek?” Supposing him to be the gardener, she said to him, “Sir, if you have carried him away, tell me where you have laid him, and I will take him away.” 16 Jesus said to her, “Mary.” She turned and said to him in Hebrew, “Rab-bo’ni!” (which means Teacher). 17 Jesus said to her, “Do not hold me, for I have not yet ascended to the Father; but go to my brethren and say to them, I am ascending to my Father and your Father, to my God and your God.” 18 Mary Mag’dalene went and said to the disciples, “I have seen the Lord”; and she told them that he had said these things to her.

Reflection for the day: “A Catholic may sin and sin as badly as anyone else, but no genuine Catholic ever denies he is a sinner. A Catholic wants his sins forgiven — not excused or sublimated.” — Venerable Fulton Sheen