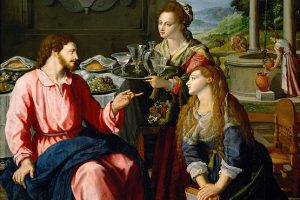 
1 And the LORD appeared to him by the oaks of Mamre, as he sat at the door of his tent in the heat of the day. 2 He lifted up his eyes and looked, and behold, three men stood in front of him. When he saw them, he ran from the tent door to meet them, and bowed himself to the earth, 3 and said, “My lord, if I have found favor in your sight, do not pass by your servant. 4 Let a little water be brought, and wash your feet, and rest yourselves under the tree, 5 while I fetch a morsel of bread, that you may refresh yourselves, and after that you may pass on — since you have come to your servant.” So they said, “Do as you have said.” 6 And Abraham hastened into the tent to Sarah, and said, “Make ready quickly three measures of fine meal, knead it, and make cakes.” 7 And Abraham ran to the herd, and took a calf, tender and good, and gave it to the servant, who hastened to prepare it. 8 Then he took curds, and milk, and the calf which he had prepared, and set it before them; and he stood by them under the tree while they ate. 9 They said to him, “Where is Sarah your wife?” And he said, “She is in the tent.” 10 The LORD said, “I will surely return to you in the spring, and Sarah your wife shall have a son.” And Sarah was listening at the tent door behind him.


24 Now I rejoice in my sufferings for your sake, and in my flesh I complete what is lacking in Christ’s afflictions for the sake of his body, that is, the church, 25 of which I became a minister according to the divine office which was given to me for you, to make the word of God fully known, 26 the mystery hidden for ages and generations but now made manifest to his saints. 27 To them God chose to make known how great among the Gentiles are the riches of the glory of this mystery, which is Christ in you, the hope of glory. 28 Him we proclaim, warning every man and teaching every man in all wisdom, that we may present every man mature in Christ.


2 He who walks blamelessly, and does what is right, and speaks truth from his heart; 3 who does not slander with his tongue, and does no evil to his friend, nor takes up a reproach against his neighbor; 4 in whose eyes a reprobate is despised, but who honors those who fear the LORD; who swears to his own hurt and does not change; 5 who does not put out his money at interest, and does not take a bribe against the innocent. He who does these things shall never be moved.


38 Now as they went on their way, he entered a village; and a woman named Martha received him into her house. 39 And she had a sister called Mary, who sat at the Lord’s feet and listened to his teaching. 40 But Martha was distracted with much serving; and she went to him and said, “Lord, do you not care that my sister has left me to serve alone? Tell her then to help me.” 41 But the Lord answered her, “Martha, Martha, you are anxious and troubled about many things; 42 one thing is needful. Mary has chosen the good portion, which shall not be taken away from her.”

Reflection for the day: “The greatest love story of all time is contained in a tiny white host.” — Venerable Fulton Sheen