Friday of the 14th Week in Ordinary Time 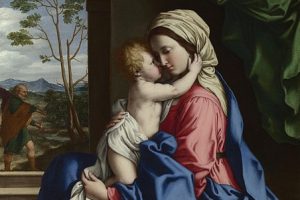 
1 So Israel took his journey with all that he had, and came to Beer-sheba, and offered sacrifices to the God of his father Isaac. 2 And God spoke to Israel in visions of the night, and said, “Jacob, Jacob.” And he said, “Here am I.” 3 Then he said, “I am God, the God of your father; do not be afraid to go down to Egypt; for I will there make of you a great nation. 4 I will go down with you to Egypt, and I will also bring you up again; and Joseph’s hand shall close your eyes.” 5 Then Jacob set out from Beer-sheba; and the sons of Israel carried Jacob their father, their little ones, and their wives, in the wagons which Pharaoh had sent to carry him. 6 They also took their cattle and their goods, which they had gained in the land of Canaan, and came into Egypt, Jacob and all his offspring with him, 7 his sons, and his sons’ sons with him, his daughters, and his sons’ daughters; all his offspring he brought with him into Egypt. 28 He sent Judah before him to Joseph, to appear before him in Goshen; and they came into the land of Goshen. 29 Then Joseph made ready his chariot and went up to meet Israel his father in Goshen; and he presented himself to him, and fell on his neck, and wept on his neck a good while. 30 Israel said to Joseph, “Now let me die, since I have seen your face and know that you are still alive.”


3 Trust in the LORD, and do good; so you will dwell in the land, and enjoy security. 4 Take delight in the LORD, and he will give you the desires of your heart. 18 The LORD knows the days of the blameless, and their heritage will abide for ever; 19 they are not put to shame in evil times, in the days of famine they have abundance. 27 Depart from evil, and do good; so shall you abide for ever. 28 For the LORD loves justice; he will not forsake his saints. The righteous shall be preserved for ever, but the children of the wicked shall be cut off. 39 The salvation of the righteous is from the LORD; he is their refuge in the time of trouble. 40 The LORD helps them and delivers them; he delivers them from the wicked, and saves them, because they take refuge in him.


16 “Behold, I send you out as sheep in the midst of wolves; so be wise as serpents and innocent as doves. 17 Beware of men; for they will deliver you up to councils, and flog you in their synagogues, 18 and you will be dragged before governors and kings for my sake, to bear testimony before them and the Gentiles. 19 When they deliver you up, do not be anxious how you are to speak or what you are to say; for what you are to say will be given to you in that hour; 20 for it is not you who speak, but the Spirit of your Father speaking through you. 21 Brother will deliver up brother to death, and the father his child, and children will rise against parents and have them put to death; 22 and you will be hated by all for my name’s sake. But he who endures to the end will be saved. 23 When they persecute you in one town, flee to the next; for truly, I say to you, you will not have gone through all the towns of Israel, before the Son of man comes.”

Reflection for the day: “Even while living in the world, the heart of Mary was so filled with motherly tenderness and compassion for men that no-one ever suffered so much for their own pains, as Mary suffered for the pains of her children.” — Saint Jerome