Wednesday of the 14th Week in Ordinary Time 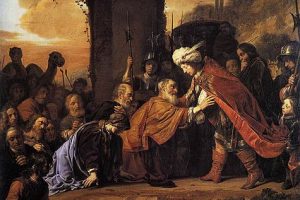 
41:55 When all the land of Egypt was famished, the people cried to Pharaoh for bread; and Pharaoh said to all the Egyptians, “Go to Joseph; what he says to you, do.” 56 So when the famine had spread over all the land, Joseph opened all the storehouses, and sold to the Egyptians, for the famine was severe in the land of Egypt. 57 Moreover, all the earth came to Egypt to Joseph to buy grain, because the famine was severe over all the earth. 42:5 Thus the sons of Israel came to buy among the others who came, for the famine was in the land of Canaan. 6 Now Joseph was governor over the land; he it was who sold to all the people of the land. And Joseph’s brothers came, and bowed themselves before him with their faces to the ground. 7 Joseph saw his brothers, and knew them, but he treated them like strangers and spoke roughly to them. “Where do you come from?” he said. They said, “From the land of Canaan, to buy food.” 17 And he put them all together in prison for three days. 18 On the third day Joseph said to them, “Do this and you will live, for I fear God: 19 if you are honest men, let one of your brothers remain confined in your prison, and let the rest go and carry grain for the famine of your households, 20 and bring your youngest brother to me; so your words will be verified, and you shall not die.” And they did so. 21 Then they said to one another, “In truth we are guilty concerning our brother, in that we saw the distress of his soul, when he besought us and we would not listen; therefore is this distress come upon us.” 22 And Reuben answered them, “Did I not tell you not to sin against the lad? But you would not listen. So now there comes a reckoning for his blood.” 23 They did not know that Joseph understood them, for there was an interpreter between them. 24 Then he turned away from them and wept; and he returned to them and spoke to them. And he took Simeon from them and bound him before their eyes.


2 Praise the Lord with the lyre, make melody to him with the harp of ten strings! 3 Sing to him a new song, play skilfully on the strings, with loud shouts. 10 The Lord brings the counsel of the nations to nought; he frustrates the plans of the peoples. 11 The counsel of the Lord stands for ever, the thoughts of his heart to all generations. 18 Behold, the eye of the Lord is on those who fear him, on those who hope in his steadfast love, 19 that he may deliver their soul from death, and keep them alive in famine.


10 And he called to him his twelve disciples and gave them authority over unclean spirits, to cast them out, and to heal every disease and every infirmity. 2 The names of the twelve apostles are these: first, Simon, who is called Peter, and Andrew his brother; James the son of Zeb′edee, and John his brother; 3 Philip and Bartholomew; Thomas and Matthew the tax collector; James the son of Alphaeus, and Thaddaeus; 4 Simon the Cananaean, and Judas Iscariot, who betrayed him. 5 These twelve Jesus sent out, charging them, “Go nowhere among the Gentiles, and enter no town of the Samaritans. 6 but go rather to the lost sheep of the house of Israel. 7 And preach as you go, saying, ‘The kingdom of heaven is at hand.'”

Reflection for the day: “It is with straws that I light my fires.” — Jesus to Bl. Ann