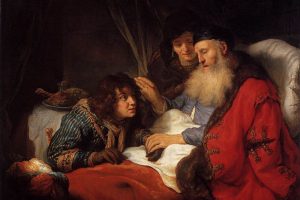 1 When Isaac was old and his eyes were dim so that he could not see, he called Esau his older son, and said to him, “My son”; and he answered, “Here I am.” 2 He said, “Behold, I am old; I do not know the day of my death. 3 Now then, take your weapons, your quiver and your bow, and go out to the field, and hunt game for me, 4 and prepare for me savory food, such as I love, and bring it to me that I may eat; that I may bless you before I die.” 5 Now Rebekah was listening when Isaac spoke to his son Esau. So when Esau went to the field to hunt for game and bring it, 15 Then Rebekah took the best garments of Esau her older son, which were with her in the house, and put them on Jacob her younger son; 16 and the skins of the kids she put upon his hands and upon the smooth part of his neck; 17 and she gave the savory food and the bread, which she had prepared, into the hand of her son Jacob. 18 So he went in to his father, and said, “My father”; and he said, “Here I am; who are you, my son?” 19 Jacob said to his father, “I am Esau your first-born. I have done as you told me; now sit up and eat of my game, that you may bless me.” 20 But Isaac said to his son, “How is it that you have found it so quickly, my son?” He answered, “Because the LORD your God granted me success.” 21 Then Isaac said to Jacob, “Come near, that I may feel you, my son, to know whether you are really my son Esau or not.” 22 So Jacob went near to Isaac his father, who felt him and said, “The voice is Jacob’s voice, but the hands are the hands of Esau.” 23 And he did not recognize him, because his hands were hairy like his brother Esau’s hands; so he blessed him. 24 He said, “Are you really my son Esau?” He answered, “I am.” 25 Then he said, “Bring it to me, that I may eat of my son’s game and bless you.” So he brought it to him, and he ate; and he brought him wine, and he drank. 26 Then his father Isaac said to him, “Come near and kiss me, my son.” 27 So he came near and kissed him; and he smelled the smell of his garments, and blessed him, and said, “See, the smell of my son is as the smell of a field which the LORD has blessed! 28 May God give you of the dew of heaven, and of the fatness of the earth, and plenty of grain and wine. 29 Let peoples serve you, and nations bow down to you. Be lord over your brothers, and may your mother’s sons bow down to you. Cursed be every one who curses you, and blessed be every one who blesses you!”

14 Then the disciples of John came to him, saying, “Why do we and the Pharisees fast, but your disciples do not fast?” 15 And Jesus said to them, “Can the wedding guests mourn as long as the bridegroom is with them? The days will come, when the bridegroom is taken away from them, and then they will fast. 16 And no one puts a piece of unshrunk cloth on an old garment, for the patch tears away from the garment, and a worse tear is made. 17 Neither is new wine put into old wineskins; if it is, the skins burst, and the wine is spilled, and the skins are destroyed; but new wine is put into fresh wineskins, and so both are preserved.”

Reflection for the day: “To live is to change, and to be perfect is to have changed often.” — Bl. John Henry Cardinal Newman