Tuesday of the 13th Week in Ordinary Time 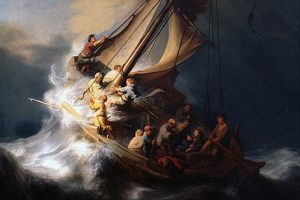 15 When morning dawned, the angels urged Lot, saying, “Arise, take your wife and your two daughters who are here, lest you be consumed in the punishment of the city.” 16 But he lingered; so the men seized him and his wife and his two daughters by the hand, the LORD being merciful to him, and they brought him forth and set him outside the city. 17 And when they had brought them forth, they said, “Flee for your life; do not look back or stop anywhere in the valley; flee to the hills, lest you be consumed.” 18 And Lot said to them, “Oh, no, my lords; 19 behold, your servant has found favor in your sight, and you have shown me great kindness in saving my life; but I cannot flee to the hills, lest the disaster overtake me, and I die. 20 Behold, yonder city is near enough to flee to, and it is a little one. Let me escape there — is it not a little one? — and my life will be saved!” 21 He said to him, “Behold, I grant you this favor also, that I will not overthrow the city of which you have spoken. 22 Make haste, escape there; for I can do nothing till you arrive there.” Therefore the name of the city was called Zo’ar. 23 The sun had risen on the earth when Lot came to Zo’ar. 24 Then the LORD rained on Sodom and Gomor’rah brimstone and fire from the LORD out of heaven; 25 and he overthrew those cities, and all the valley, and all the inhabitants of the cities, and what grew on the ground. 26 But Lot’s wife behind him looked back, and she became a pillar of salt. 27 And Abraham went early in the morning to the place where he had stood before the LORD; 28 and he looked down toward Sodom and Gomor’rah and toward all the land of the valley, and beheld, and lo, the smoke of the land went up like the smoke of a furnace. 29 So it was that, when God destroyed the cities of the valley, God remembered Abraham, and sent Lot out of the midst of the overthrow, when he overthrew the cities in which Lot dwelt.

2 Prove me, O LORD, and try me; test my heart and my mind. 3 For thy steadfast love is before my eyes, and I walk in faithfulness to thee. 9 Sweep me not away with sinners, nor my life with bloodthirsty men, 10 men in whose hands are evil devices, and whose right hands are full of bribes. 11 But as for me, I walk in my integrity; redeem me, and be gracious to me. 12 My foot stands on level ground; in the great congregation I will bless the LORD.

23 And when he got into the boat, his disciples followed him. 24 And behold, there arose a great storm on the sea, so that the boat was being swamped by the waves; but he was asleep. 25 And they went and woke him, saying, “Save, Lord; we are perishing.” 26 And he said to them, “Why are you afraid, O men of little faith?” Then he rose and rebuked the winds and the sea; and there was a great calm. 27 And the men marveled, saying, “What sort of man is this, that even winds and sea obey him?”

Reflection for the day: “Moreover, Christians are born for combat, whereof the greater the vehemence, the more assured, God willing, the triumph: ‘Have confidence; I have overcome the world’ (John 16:33)” -– Pope Leo XIII