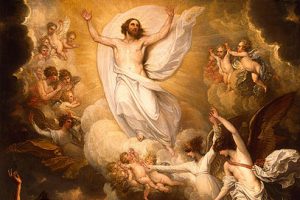 
1 In the first book, O Theoph′ilus, I have dealt with all that Jesus began to do and teach, 2 until the day when he was taken up, after he had given commandment through the Holy Spirit to the apostles whom he had chosen. 3 To them he presented himself alive after his passion by many proofs, appearing to them during forty days, and speaking of the kingdom of God. 4 And while staying with them he charged them not to depart from Jerusalem, but to wait for the promise of the Father, which, he said, “you heard from me, 5 for John baptized with water, but before many days you shall be baptized with the Holy Spirit.” 6 So when they had come together, they asked him, “Lord, will you at this time restore the kingdom to Israel?” 7 He said to them, “It is not for you to know times or seasons which the Father has fixed by his own authority. 8 But you shall receive power when the Holy Spirit has come upon you; and you shall be my witnesses in Jerusalem and in all Judea and Samar′ia and to the end of the earth.” 9 And when he had said this, as they were looking on, he was lifted up, and a cloud took him out of their sight. 10 And while they were gazing into heaven as he went, behold, two men stood by them in white robes, 11 and said, “Men of Galilee, why do you stand looking into heaven? This Jesus, who was taken up from you into heaven, will come in the same way as you saw him go into heaven.”


16 I do not cease to give thanks for you, remembering you in my prayers, 17 that the God of our Lord Jesus Christ, the Father of glory, may give you a spirit of wisdom and of revelation in the knowledge of him, 18 having the eyes of your hearts enlightened, that you may know what is the hope to which he has called you, what are the riches of his glorious inheritance in the saints, 19 and what is the immeasurable greatness of his power in us who believe, according to the working of his great might 20 which he accomplished in Christ when he raised him from the dead and made him sit at his right hand in the heavenly places, 21 far above all rule and authority and power and dominion, and above every name that is named, not only in this age but also in that which is to come; 22 and he has put all things under his feet and has made him the head over all things for the church, 23 which is his body, the fulness of him who fills all in all.


1 Clap your hands, all peoples! Shout to God with loud songs of joy! 2 For the Lord, the Most High, is terrible, a great king over all the earth. 3 He subdued peoples under us, and nations under our feet. 4 He chose our heritage for us, the pride of Jacob whom he loves. Selah 5 God has gone up with a shout, the Lord with the sound of a trumpet. 6 Sing praises to God, sing praises! Sing praises to our King, sing praises! 7 For God is the king of all the earth; sing praises with a psalm! 8 God reigns over the nations; God sits on his holy throne. 9 The princes of the peoples gather as the people of the God of Abraham. For the shields of the earth belong to God; he is highly exalted!


45 Then he opened their minds to understand the scriptures, 46 and said to them, “Thus it is written, that the Christ should suffer and on the third day rise from the dead, 47 and that repentance and forgiveness of sins should be preached in his name to all nations, beginning from Jerusalem. 48 You are witnesses of these things. 49 And behold, I send the promise of my Father upon you; but stay in the city, until you are clothed with power from on high.” 50 Then he led them out as far as Bethany, and lifting up his hands he blessed them. 51 While he blessed them, he parted from them and was carried up into heaven. 52 And they worshiped him, and returned to Jerusalem with great joy, 53 and were continually in the temple blessing God.

Reflection for the day: “About Jesus Christ and the Church, I simply know they’re just one thing, and we shouldn’t complicate the matter.” — St. Joan of Arc