Saturday of the 5th Week of Easter 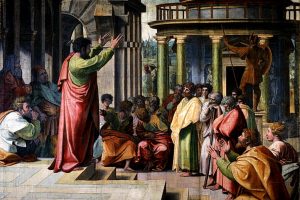 
1 And he came also to Derbe and to Lystra. A disciple was there, named Timothy, the son of a Jewish woman who was a believer; but his father was a Greek. 2 He was well spoken of by the brethren at Lystra and Ico’nium. 3 Paul wanted Timothy to accompany him; and he took him and circumcised him because of the Jews that were in those places, for they all knew that his father was a Greek. 4 As they went on their way through the cities, they delivered to them for observance the decisions which had been reached by the apostles and elders who were at Jerusalem. 5 So the churches were strengthened in the faith, and they increased in numbers daily. 6 And they went through the region of Phry’gia and Galatia, having been forbidden by the Holy Spirit to speak the word in Asia. 7 And when they had come opposite My’sia, they attempted to go into Bithyn’ia, but the Spirit of Jesus did not allow them; 8 so, passing by My’sia, they went down to Tro’as. 9 And a vision appeared to Paul in the night: a man of Macedo’nia was standing beseeching him and saying, “Come over to Macedo’nia and help us.” 10 And when he had seen the vision, immediately we sought to go on into Macedo’nia, concluding that God had called us to preach the gospel to them.


1 Make a joyful noise to the LORD, all the lands! 2 Serve the LORD with gladness! Come into his presence with singing! 3 Know that the LORD is God! It is he that made us, and we are his; we are his people, and the sheep of his pasture. 5 For the LORD is good; his steadfast love endures for ever, and his faithfulness to all generations.

Reflection for the day: “We become what we love and who we love shapes what we become. If we love things, we become a thing. If we love nothing, we become nothing. Imitation is not a literal mimicking of Christ, rather it means becoming the image of the beloved, an image disclosed through transformation. This means we are to become vessels of God´s compassionate love for others.” — St. Clare of Assisi