Tuesday of the 5th Week of Easter 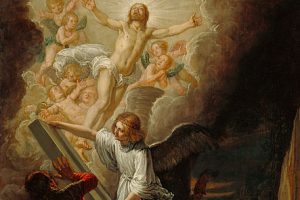 19 But Jews came there from Antioch and Ico’nium; and having persuaded the people, they stoned Paul and dragged him out of the city, supposing that he was dead. 20 But when the disciples gathered about him, he rose up and entered the city; and on the next day he went on with Barnabas to Derbe. 21 When they had preached the gospel to that city and had made many disciples, they returned to Lystra and to Ico’nium and to Antioch, 22 strengthening the souls of the disciples, exhorting them to continue in the faith, and saying that through many tribulations we must enter the kingdom of God. 23 And when they had appointed elders for them in every church, with prayer and fasting they committed them to the Lord in whom they believed. 24 Then they passed through Pisid’ia, and came to Pamphyl’ia. 25 And when they had spoken the word in Perga, they went down to Attali’a; 26 and from there they sailed to Antioch, where they had been commended to the grace of God for the work which they had fulfilled. 27 And when they arrived, they gathered the church together and declared all that God had done with them, and how he had opened a door of faith to the Gentiles. 28 And they remained no little time with the disciples.

10 All thy works shall give thanks to thee, O LORD, and all thy saints shall bless thee! 11 They shall speak of the glory of thy kingdom, and tell of thy power, 12 to make known to the sons of men thy mighty deeds, and the glorious splendor of thy kingdom. 13 Thy kingdom is an everlasting kingdom, and thy dominion endures throughout all generations. The LORD is faithful in all his words, and gracious in all his deeds. 21 My mouth will speak the praise of the LORD, and let all flesh bless his holy name for ever and ever.

27 “Peace I leave with you; my peace I give to you; not as the world gives do I give to you. Let not your hearts be troubled, neither let them be afraid. 28 You heard me say to you, ‘I go away, and I will come to you.’ If you loved me, you would have rejoiced, because I go to the Father; for the Father is greater than I. 29 And now I have told you before it takes place, so that when it does take place, you may believe. 30 I will no longer talk much with you, for the ruler of this world is coming. He has no power over me; 31 but I do as the Father has commanded me, so that the world may know that I love the Father. Rise, let us go hence.”

Reflection for the day: “Keep yourself in the presence of our Lord, not only during prayer, but also at other times, as a disciple before his Master, anxious to do His Will by giving up his own.” — St. Margaret Mary Alacoque