Monday of the 4th Week of Easter 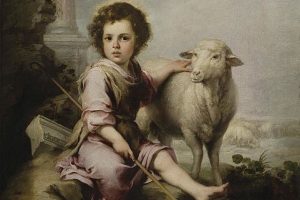 
1 Now the apostles and the brethren who were in Judea heard that the Gentiles also had received the word of God. 2 So when Peter went up to Jerusalem, the circumcision party criticized him, 3 saying, “Why did you go to uncircumcised men and eat with them?” 4 But Peter began and explained to them in order: 5 “I was in the city of Joppa praying; and in a trance I saw a vision, something descending, like a great sheet, let down from heaven by four corners; and it came down to me. 6 Looking at it closely I observed animals and beasts of prey and reptiles and birds of the air. 7 And I heard a voice saying to me, ‘Rise, Peter; kill and eat.’ 8 But I said, ‘No, Lord; for nothing common or unclean has ever entered my mouth.’ 9 But the voice answered a second time from heaven, ‘What God has cleansed you must not call common.’ 10 This happened three times, and all was drawn up again into heaven. 11 At that very moment three men arrived at the house in which we were, sent to me from Caesare’a. 12 And the Spirit told me to go with them, making no distinction. These six brethren also accompanied me, and we entered the man’s house. 13 And he told us how he had seen the angel standing in his house and saying, ‘Send to Joppa and bring Simon called Peter; 14 he will declare to you a message by which you will be saved, you and all your household.’ 15 As I began to speak, the Holy Spirit fell on them just as on us at the beginning. 16 And I remembered the word of the Lord, how he said, ‘John baptized with water, but you shall be baptized with the Holy Spirit.’ 17 If then God gave the same gift to them as he gave to us when we believed in the Lord Jesus Christ, who was I that I could withstand God?” 18 When they heard this they were silenced. And they glorified God, saying, “Then to the Gentiles also God has granted repentance unto life.”


1 “Truly, truly, I say to you, he who does not enter the sheepfold by the door but climbs in by another way, that man is a thief and a robber; 2 but he who enters by the door is the shepherd of the sheep. 3 To him the gatekeeper opens; the sheep hear his voice, and he calls his own sheep by name and leads them out. 4 When he has brought out all his own, he goes before them, and the sheep follow him, for they know his voice. 5 A stranger they will not follow, but they will flee from him, for they do not know the voice of strangers.” 6 This figure Jesus used with them, but they did not understand what he was saying to them. 7 So Jesus again said to them, “Truly, truly, I say to you, I am the door of the sheep. 8 All who came before me are thieves and robbers; but the sheep did not heed them. 9 I am the door; if any one enters by me, he will be saved, and will go in and out and find pasture. 10 The thief comes only to steal and kill and destroy; I came that they may have life, and have it abundantly.”

Reflection for the day: “Let the storm rage and the sky darken – not for that shall we be dismayed. If we trust as we should in Mary, we shall recognize in her the Virgin Most Powerful who with the virginal foot did crush the head of the serpent.” — Pope St. Pius X