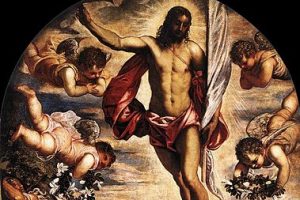 
31 So the church throughout all Judea and Galilee and Sama’ria had peace and was built up; and walking in the fear of the Lord and in the comfort of the Holy Spirit it was multiplied. 32 Now as Peter went here and there among them all, he came down also to the saints that lived at Lydda. 33 There he found a man named Aene’as, who had been bedridden for eight years and was paralyzed. 34 And Peter said to him, “Aene’as, Jesus Christ heals you; rise and make your bed.” And immediately he rose. 35 And all the residents of Lydda and Sharon saw him, and they turned to the Lord. 36 Now there was at Joppa a disciple named Tabitha, which means Dorcas. She was full of good works and acts of charity. 37 In those days she fell sick and died; and when they had washed her, they laid her in an upper room. 38 Since Lydda was near Joppa, the disciples, hearing that Peter was there, sent two men to him entreating him, “Please come to us without delay.” 39 So Peter rose and went with them. And when he had come, they took him to the upper room. All the widows stood beside him weeping, and showing tunics and other garments which Dorcas made while she was with them. 40 But Peter put them all outside and knelt down and prayed; then turning to the body he said, “Tabitha, rise.” And she opened her eyes, and when she saw Peter she sat up. 41 And he gave her his hand and lifted her up. Then calling the saints and widows he presented her alive. 42 And it became known throughout all Joppa, and many believed in the Lord.


12 What shall I render to the LORD for all his bounty to me? 13 I will lift up the cup of salvation and call on the name of the LORD, 14 I will pay my vows to the LORD in the presence of all his people. 15 Precious in the sight of the LORD is the death of his saints. 16 O LORD, I am thy servant; I am thy servant, the son of thy handmaid. Thou hast loosed my bonds. 17 I will offer to thee the sacrifice of thanksgiving and call on the name of the LORD.

Reflection for the day: “With all the strength of my soul I urge you young people to approach the Communion table as often as you can. Feed on this bread of angels whence you will draw all the energy you need to fight inner battles. Because true happiness, dear friends, does not consist in the pleasures of the world or in earthly things, but in peace of conscience, which we have only if we are pure in heart and mind.” — Bl. Pier Giorgio Frassati