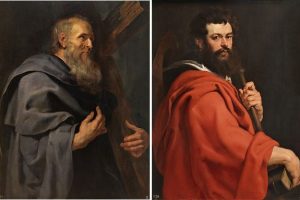 
1 Now I would remind you, brethren, in what terms I preached to you the gospel, which you received, in which you stand, 2 by which you are saved, if you hold it fast — unless you believed in vain. 3 For I delivered to you as of first importance what I also received, that Christ died for our sins in accordance with the scriptures, 4 that he was buried, that he was raised on the third day in accordance with the scriptures, 5 and that he appeared to Cephas, then to the twelve. 6 Then he appeared to more than five hundred brethren at one time, most of whom are still alive, though some have fallen asleep. 7 Then he appeared to James, then to all the apostles. 8 Last of all, as to one untimely born, he appeared also to me.


1 The heavens are telling the glory of God; and the firmament proclaims his handiwork. 2 Day to day pours forth speech, and night to night declares knowledge. 3 There is no speech, nor are there words; their voice is not heard; 4 yet their voice goes out through all the earth, and their words to the end of the world. In them he has set a tent for the sun.


6 Jesus said to him, “I am the way, and the truth, and the life; no one comes to the Father, but by me. 7 If you had known me, you would have known my Father also; henceforth you know him and have seen him.” 8 Philip said to him, “Lord, show us the Father, and we shall be satisfied.” 9 Jesus said to him, “Have I been with you so long, and yet you do not know me, Philip? He who has seen me has seen the Father; how can you say, ‘Show us the Father’? 10 Do you not believe that I am in the Father and the Father in me? The words that I say to you I do not speak on my own authority; but the Father who dwells in me does his works. 11 Believe me that I am in the Father and the Father in me; or else believe me for the sake of the works themselves. 12 “Truly, truly, I say to you, he who believes in me will also do the works that I do; and greater works than these will he do, because I go to the Father. 13 Whatever you ask in my name, I will do it, that the Father may be glorified in the Son; 14 if you ask anything in my name, I will do it.”

Reflection for the day: “Whether, therefore, we receive what we ask for, or do not receive it, let us still continue steadfast in prayer. For to fail in obtaining the desires of our heart, when God so wills it, is not worse than to receive it; for we know not as He does, what is profitable to us.” — St. John Chrysostom