Saturday in the Octave of Easter 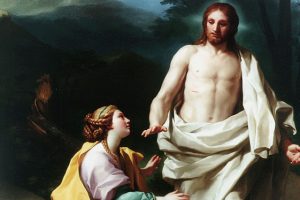 13 Now when they saw the boldness of Peter and John, and perceived that they were uneducated, common men, they wondered; and they recognized that they had been with Jesus. 14 But seeing the man that had been healed standing beside them, they had nothing to say in opposition. 15 But when they had commanded them to go aside out of the council, they conferred with one another,16 saying, “What shall we do with these men? For that a notable sign has been performed through them is manifest to all the inhabitants of Jerusalem, and we cannot deny it. 17 But in order that it may spread no further among the people, let us warn them to speak no more to any one in this name.” 18 So they called them and charged them not to speak or teach at all in the name of Jesus. 19 But Peter and John answered them, “Whether it is right in the sight of God to listen to you rather than to God, you must judge; 20 for we cannot but speak of what we have seen and heard.” 21 And when they had further threatened them, they let them go, finding no way to punish them, because of the people; for all men praised God for what had happened.

9 Now when he rose early on the first day of the week, he appeared first to Mary Magdalene, from whom he had cast out seven demons. 10 She went and told those who had been with him, as they mourned and wept. 11 But when they heard that he was alive and had been seen by her, they would not believe it. 12 After this he appeared in another form to two of them, as they were walking into the country. 13 And they went back and told the rest, but they did not believe them. 14 Afterward he appeared to the eleven themselves as they sat at table; and he upbraided them for their unbelief and hardness of heart, because they had not believed those who saw him after he had risen. 15 And he said to them, “Go into all the world and preach the gospel to the whole creation.”

Reflection for the day: “The devil strains every nerve to secure the souls which belong to Christ. We should not grudge our toil in wrestling them from Satan, and giving them back to God.” — St. Sebastian