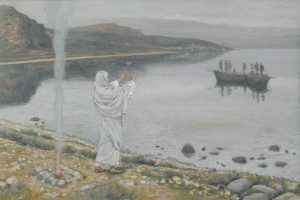 1 And as they were speaking to the people, the priests and the captain of the temple and the Sad’ducees came upon them, 2 annoyed because they were teaching the people and proclaiming in Jesus the resurrection from the dead. 3 And they arrested them and put them in custody until the morrow, for it was already evening. 4 But many of those who heard the word believed; and the number of the men came to about five thousand. 5 On the morrow their rulers and elders and scribes were gathered together in Jerusalem, 6 with Annas the high priest and Ca’iaphas and John and Alexander, and all who were of the high-priestly family. 7 And when they had set them in the midst, they inquired, “By what power or by what name did you do this?” 8 Then Peter, filled with the Holy Spirit, said to them, “Rulers of the people and elders, 9 if we are being examined today concerning a good deed done to a cripple, by what means this man has been healed, 10 be it known to you all, and to all the people of Israel, that by the name of Jesus Christ of Nazareth, whom you crucified, whom God raised from the dead, by him this man is standing before you well. 11 This is the stone which was rejected by you builders, but which has become the head of the corner. 12 And there is salvation in no one else, for there is no other name under heaven given among men by which we must be saved.”

1 After this Jesus revealed himself again to the disciples by the Sea of Tibe’ri-as; and he revealed himself in this way. 2 Simon Peter, Thomas called the Twin, Nathan’a-el of Cana in Galilee, the sons of Zeb’edee, and two others of his disciples were together. 3 Simon Peter said to them, “I am going fishing.” They said to him, “We will go with you.” They went out and got into the boat; but that night they caught nothing. 4 Just as day was breaking, Jesus stood on the beach; yet the disciples did not know that it was Jesus. 5 Jesus said to them, “Children, have you any fish?” They answered him, “No.” 6 He said to them, “Cast the net on the right side of the boat, and you will find some.” So they cast it, and now they were not able to haul it in, for the quantity of fish. 7 That disciple whom Jesus loved said to Peter, “It is the Lord!” When Simon Peter heard that it was the Lord, he put on his clothes, for he was stripped for work, and sprang into the sea. 8 But the other disciples came in the boat, dragging the net full of fish, for they were not far from the land, but about a hundred yards off. 9 When they got out on land, they saw a charcoal fire there, with fish lying on it, and bread. 10 Jesus said to them, “Bring some of the fish that you have just caught.” 11 So Simon Peter went aboard and hauled the net ashore, full of large fish, a hundred and fifty-three of them; and although there were so many, the net was not torn. 12 Jesus said to them, “Come and have breakfast.” Now none of the disciples dared ask him, “Who are you?” They knew it was the Lord. 13 Jesus came and took the bread and gave it to them, and so with the fish. 14 This was now the third time that Jesus was revealed to the disciples after he was raised from the dead.

Reflection for the day: “For 86 years I have served Jesus Christ and he has never abandoned me. How could I curse my blessed king and savior?” — St. Polycarp