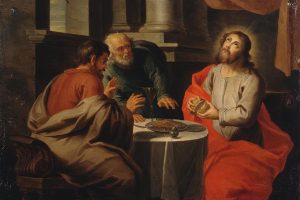 
1 Now Peter and John were going up to the temple at the hour of prayer, the ninth hour. 2 And a man lame from birth was being carried, whom they laid daily at that gate of the temple which is called Beautiful to ask alms of those who entered the temple. 3 Seeing Peter and John about to go into the temple, he asked for alms. 4 And Peter directed his gaze at him, with John, and said, “Look at us.” 5 And he fixed his attention upon them, expecting to receive something from them. 6 But Peter said, “I have no silver and gold, but I give you what I have; in the name of Jesus Christ of Nazareth, walk.” 7 And he took him by the right hand and raised him up; and immediately his feet and ankles were made strong. 8 And leaping up he stood and walked and entered the temple with them, walking and leaping and praising God. 9 And all the people saw him walking and praising God, 10 and recognized him as the one who sat for alms at the Beautiful Gate of the temple; and they were filled with wonder and amazement at what had happened to him.


13 That very day two of them were going to a village named Emma’us, about seven miles from Jerusalem, 14 and talking with each other about all these things that had happened. 15 While they were talking and discussing together, Jesus himself drew near and went with them. 16 But their eyes were kept from recognizing him. 17 And he said to them, “What is this conversation which you are holding with each other as you walk?” And they stood still, looking sad. 18 Then one of them, named Cle’opas, answered him, “Are you the only visitor to Jerusalem who does not know the things that have happened there in these days?” 19 And he said to them, “What things?” And they said to him, “Concerning Jesus of Nazareth, who was a prophet mighty in deed and word before God and all the people, 20 and how our chief priests and rulers delivered him up to be condemned to death, and crucified him. 21 But we had hoped that he was the one to redeem Israel. Yes, and besides all this, it is now the third day since this happened. 22 Moreover, some women of our company amazed us. They were at the tomb early in the morning 23 and did not find his body; and they came back saying that they had even seen a vision of angels, who said that he was alive. 24 Some of those who were with us went to the tomb, and found it just as the women had said; but him they did not see.” 25 And he said to them, “O foolish men, and slow of heart to believe all that the prophets have spoken! 26 Was it not necessary that the Christ should suffer these things and enter into his glory?” 27 And beginning with Moses and all the prophets, he interpreted to them in all the scriptures the things concerning himself. 28 So they drew near to the village to which they were going. He appeared to be going further, 29 but they constrained him, saying, “Stay with us, for it is toward evening and the day is now far spent.” So he went in to stay with them. 30 When he was at table with them, he took the bread and blessed, and broke it, and gave it to them. 31 And their eyes were opened and they recognized him; and he vanished out of their sight. 32 They said to each other, “Did not our hearts burn within us while he talked to us on the road, while he opened to us the scriptures?” 33 And they rose that same hour and returned to Jerusalem; and they found the eleven gathered together and those who were with them, 34 who said, “The Lord has risen indeed, and has appeared to Simon!” 35 Then they told what had happened on the road, and how he was known to them in the breaking of the bread.

Reflection for the day: “Everything that has being comes from God. Nothing, therefore, that happens to us—trouble or temptation or injury or torment or slander or anything else that could possibly happen to us—can or will disturb us. Rather, we are content and hold these things in reverence, reflecting that they come from God and are given to us as good favors, not out of hatred but out of love.” – St. Catherine of Siena