Good Friday of the Lord’s Passion 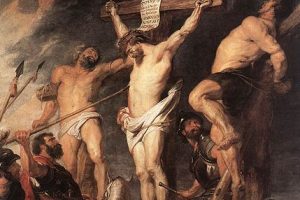 
52:13 Behold, my servant shall prosper, he shall be exalted and lifted up, and shall be very high. 14 As many were astonished at him — his appearance was so marred, beyond human semblance, and his form beyond that of the sons of men — 15 so shall he startle many nations; kings shall shut their mouths because of him; for that which has not been told them they shall see, and that which they have not heard they shall understand. 53:1 Who has believed what we have heard? And to whom has the arm of the LORD been revealed? 2 For he grew up before him like a young plant, and like a root out of dry ground; he had no form or comeliness that we should look at him, and no beauty that we should desire him. 3 He was despised and rejected by men; a man of sorrows, and acquainted with grief; and as one from whom men hide their faces he was despised, and we esteemed him not. 4 Surely he has borne our griefs and carried our sorrows; yet we esteemed him stricken, smitten by God, and afflicted. 5 But he was wounded for our transgressions, he was bruised for our iniquities; upon him was the chastisement that made us whole, and with his stripes we are healed. 6 All we like sheep have gone astray; we have turned every one to his own way; and the LORD has laid on him the iniquity of us all. 7 He was oppressed, and he was afflicted, yet he opened not his mouth; like a lamb that is led to the slaughter, and like a sheep that before its shearers is dumb, so he opened not his mouth. 8 By oppression and judgment he was taken away; and as for his generation, who considered that he was cut off out of the land of the living, stricken for the transgression of my people? 9 And they made his grave with the wicked and with a rich man in his death, although he had done no violence, and there was no deceit in his mouth. 10 Yet it was the will of the LORD to bruise him; he has put him to grief; when he makes himself an offering for sin, he shall see his offspring, he shall prolong his days; the will of the LORD shall prosper in his hand; 11 he shall see the fruit of the travail of his soul and be satisfied; by his knowledge shall the righteous one, my servant, make many to be accounted righteous; and he shall bear their iniquities. 12 Therefore I will divide him a portion with the great, and he shall divide the spoil with the strong; because he poured out his soul to death, and was numbered with the transgressors; yet he bore the sin of many, and made intercession for the transgressors.


4:14 Since then we have a great high priest who has passed through the heavens, Jesus, the Son of God, let us hold fast our confession. 15 For we have not a high priest who is unable to sympathize with our weaknesses, but one who in every respect has been tempted as we are, yet without sin. 16 Let us then with confidence draw near to the throne of grace, that we may receive mercy and find grace to help in time of need. 5:7 In the days of his flesh, Jesus offered up prayers and supplications, with loud cries and tears, to him who was able to save him from death, and he was heard for his godly fear. 8 Although he was a Son, he learned obedience through what he suffered; 9 and being made perfect he became the source of eternal salvation to all who obey him.


1 In thee, O LORD, do I seek refuge; let me never be put to shame; in thy righteousness deliver me! 5 Into thy hand I commit my spirit; thou hast redeemed me, O LORD, faithful God. 11 I am the scorn of all my adversaries, a horror to my neighbors, an object of dread to my acquaintances; those who see me in the street flee from me. 12 I have passed out of mind like one who is dead; I have become like a broken vessel. 14 But I trust in thee, O LORD, I say, “Thou art my God.” 15 My times are in thy hand; deliver me from the hand of my enemies and persecutors! 16 Let thy face shine on thy servant; save me in thy steadfast love! 24 Be strong, and let your heart take courage, all you who wait for the LORD!

Reflection for the day: “Mount Calvary is the academy of love.” — St. Francis de Sales