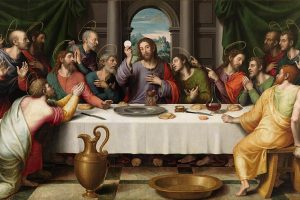 
4 The Lord GOD has given me the tongue of those who are taught, that I may know how to sustain with a word him that is weary. Morning by morning he wakens, he wakens my ear to hear as those who are taught. 5 The Lord GOD has opened my ear, and I was not rebellious, I turned not backward. 6 I gave my back to the smiters, and my cheeks to those who pulled out the beard; I hid not my face from shame and spitting. 7 For the Lord GOD helps me; therefore I have not been confounded; therefore I have set my face like a flint, and I know that I shall not be put to shame; 8 he who vindicates me is near. Who will contend with me? Let us stand up together. Who is my adversary? Let him come near to me. 9 Behold, the Lord GOD helps me; who will declare me guilty? Behold, all of them will wear out like a garment; the moth will eat them up.


7 For it is for thy sake that I have borne reproach, that shame has covered my face. 8 I have become a stranger to my brethren, an alien to my mother’s sons. 9 For zeal for thy house has consumed me, and the insults of those who insult thee have fallen on me. 20 Insults have broken my heart, so that I am in despair. I looked for pity, but there was none; and for comforters, but I found none. 21 They gave me poison for food, and for my thirst they gave me vinegar to drink. 30 I will praise the name of God with a song; I will magnify him with thanksgiving. 32 Let the oppressed see it and be glad; you who seek God, let your hearts revive. 33 For the LORD hears the needy, and does not despise his own that are in bonds.


14 Then one of the twelve, who was called Judas Iscariot, went to the chief priests 15 and said, “What will you give me if I deliver him to you?” And they paid him thirty pieces of silver. 16 And from that moment he sought an opportunity to betray him. 17 Now on the first day of Unleavened Bread the disciples came to Jesus, saying, “Where will you have us prepare for you to eat the passover?” 18 He said, “Go into the city to a certain one, and say to him, ‘The Teacher says, My time is at hand; I will keep the passover at your house with my disciples.'” 19 And the disciples did as Jesus had directed them, and they prepared the passover. 20 When it was evening, he sat at table with the twelve disciples; 21 and as they were eating, he said, “Truly, I say to you, one of you will betray me.” 22 And they were very sorrowful, and began to say to him one after another, “Is it I, Lord?” 23 He answered, “He who has dipped his hand in the dish with me, will betray me. 24 The Son of man goes as it is written of him, but woe to that man by whom the Son of man is betrayed! It would have been better for that man if he had not been born.” 25 Judas, who betrayed him, said, “Is it I, Master?” He said to him, “You have said so.”