Monday of the 5th Week of Lent 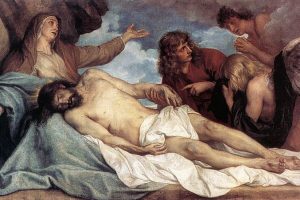 
1 The LORD is my shepherd, I shall not want; 2 he makes me lie down in green pastures. He leads me beside still waters; 3 he restores my soul. He leads me in paths of righteousness for his name’s sake. 4 Even though I walk through the valley of the shadow of death, I fear no evil; for thou art with me; thy rod and thy staff, they comfort me. 5 Thou preparest a table before me in the presence of my enemies; thou anointest my head with oil, my cup overflows. 6 Surely goodness and mercy shall follow me all the days of my life; and I shall dwell in the house of the LORD for ever.


12 Again Jesus spoke to them, saying, “I am the light of the world; he who follows me will not walk in darkness, but will have the light of life.” 13 The Pharisees then said to him, “You are bearing witness to yourself; your testimony is not true.” 14 Jesus answered, “Even if I do bear witness to myself, my testimony is true, for I know whence I have come and whither I am going, but you do not know whence I come or whither I am going. 15 You judge according to the flesh, I judge no one. 16 Yet even if I do judge, my judgment is true, for it is not I alone that judge, but I and he who sent me. 17 In your law it is written that the testimony of two men is true; 18 I bear witness to myself, and the Father who sent me bears witness to me.” 19 They said to him therefore, “Where is your Father?” Jesus answered, “You know neither me nor my Father; if you knew me, you would know my Father also.” 20 These words he spoke in the treasury, as he taught in the temple; but no one arrested him, because his hour had not yet come.

Reflection for the day: “O Mother of Sorrows, for the love of your Son, accept me as your servant and pray to Him for me. And You, my Redeemer, since You have died for me, allow me to love You, for I desire only You and nothing more.” — St. Alphonsus Liguori, Stations of the Cross