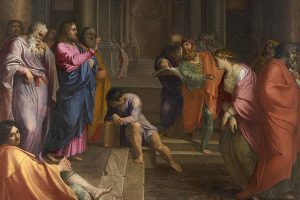 
16 Thus says the LORD, who makes a way in the sea, a path in the mighty waters, 17 who brings forth chariot and horse, army and warrior; they lie down, they cannot rise, they are extinguished, quenched like a wick: 18 “Remember not the former things, nor consider the things of old. 19 Behold, I am doing a new thing; now it springs forth, do you not perceive it? I will make a way in the wilderness and rivers in the desert. 20 The wild beasts will honor me, the jackals and the ostriches; for I give water in the wilderness, rivers in the desert, to give drink to my chosen people, 21 the people whom I formed for myself that they might declare my praise.


8 Indeed I count everything as loss because of the surpassing worth of knowing Christ Jesus my Lord. For his sake I have suffered the loss of all things, and count them as refuse, in order that I may gain Christ 9 and be found in him, not having a righteousness of my own, based on law, but that which is through faith in Christ, the righteousness from God that depends on faith; 10 that I may know him and the power of his resurrection, and may share his sufferings, becoming like him in his death, 11 that if possible I may attain the resurrection from the dead. 12 Not that I have already obtained this or am already perfect; but I press on to make it my own, because Christ Jesus has made me his own. 13 Brethren, I do not consider that I have made it my own; but one thing I do, forgetting what lies behind and straining forward to what lies ahead, 14 I press on toward the goal for the prize of the upward call of God in Christ Jesus.


1 When the LORD restored the fortunes of Zion, we were like those who dream. 2 Then our mouth was filled with laughter, and our tongue with shouts of joy; then they said among the nations, “The LORD has done great things for them.” 3 The LORD has done great things for us; we are glad. 4 Restore our fortunes, O LORD, like the watercourses in the Negeb! 5 May those who sow in tears reap with shouts of joy! 6 He that goes forth weeping, bearing the seed for sowing, shall come home with shouts of joy, bringing his sheaves with him.


1 But Jesus went to the Mount of Olives. 2 Early in the morning he came again to the temple; all the people came to him, and he sat down and taught them. 3 The scribes and the Pharisees brought a woman who had been caught in adultery, and placing her in the midst 4 they said to him, “Teacher, this woman has been caught in the act of adultery. 5 Now in the law Moses commanded us to stone such. What do you say about her?” 6 This they said to test him, that they might have some charge to bring against him. Jesus bent down and wrote with his finger on the ground. 7 And as they continued to ask him, he stood up and said to them, “Let him who is without sin among you be the first to throw a stone at her.” 8 And once more he bent down and wrote with his finger on the ground. 9 But when they heard it, they went away, one by one, beginning with the eldest, and Jesus was left alone with the woman standing before him. 10 Jesus looked up and said to her, “Woman, where are they? Has no one condemned you?” 11 She said, “No one, Lord.” And Jesus said, “Neither do I condemn you; go, and do not sin again.”

Reflection for the day: “If a box is filled with salt, it cannot be filled with sand, and if our hearts are filled with hatred of our neighbor, how can God fill them with His love? We must forgive others, for on no other condition will our own sins be forgiven. It is as simple as that. There can be and there will be no mercy toward us unless we ourselves are merciful. The real test of the Christian then is not how much he loves his friends, but how much he loves his enemies.” — Venerable Fulton Sheen