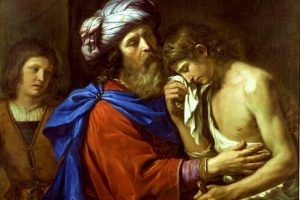 
9 And the LORD said to Joshua, “This day I have rolled away the reproach of Egypt from you.” And so the name of that place is called Gilgal to this day. 10 While the people of Israel were encamped in Gilgal they kept the passover on the fourteenth day of the month at evening in the plains of Jericho. 11 And on the morrow after the passover, on that very day, they ate of the produce of the land, unleavened cakes and parched grain. 12 And the manna ceased on the morrow, when they ate of the produce of the land; and the people of Israel had manna no more, but ate of the fruit of the land of Canaan that year.


17 Therefore, if any one is in Christ, he is a new creation; the old has passed away, behold, the new has come. 18 All this is from God, who through Christ reconciled us to himself and gave us the ministry of reconciliation; 19 that is, in Christ God was reconciling the world to himself, not counting their trespasses against them, and entrusting to us the message of reconciliation. 20 So we are ambassadors for Christ, God making his appeal through us. We beseech you on behalf of Christ, be reconciled to God. 21 For our sake he made him to be sin who knew no sin, so that in him we might become the righteousness of God.


1 I will bless the LORD at all times; his praise shall continually be in my mouth. 2 My soul makes its boast in the LORD; let the afflicted hear and be glad. 3 O magnify the LORD with me, and let us exalt his name together! 4 I sought the LORD, and he answered me, and delivered me from all my fears. 5 Look to him, and be radiant; so your faces shall never be ashamed. 6 This poor man cried, and the LORD heard him, and saved him out of all his troubles.


1 Now the tax collectors and sinners were all drawing near to hear him. 2 And the Pharisees and the scribes murmured, saying, “This man receives sinners and eats with them.” 3 So he told them this parable: 11 And he said, “There was a man who had two sons; 12 and the younger of them said to his father, ‘Father, give me the share of property that falls to me.’ And he divided his living between them. 13 Not many days later, the younger son gathered all he had and took his journey into a far country, and there he squandered his property in loose living. 14 And when he had spent everything, a great famine arose in that country, and he began to be in want. 15 So he went and joined himself to one of the citizens of that country, who sent him into his fields to feed swine. 16 And he would gladly have fed on the pods that the swine ate; and no one gave him anything. 17 But when he came to himself he said, ‘How many of my father’s hired servants have bread enough and to spare, but I perish here with hunger! 18I will arise and go to my father, and I will say to him, “Father, I have sinned against heaven and before you; 19 I am no longer worthy to be called your son; treat me as one of your hired servants.”‘ 20 And he arose and came to his father. But while he was yet at a distance, his father saw him and had compassion, and ran and embraced him and kissed him. 21 And the son said to him, ‘Father, I have sinned against heaven and before you; I am no longer worthy to be called your son.’ 22 But the father said to his servants, ‘Bring quickly the best robe, and put it on him; and put a ring on his hand, and shoes on his feet; 23 and bring the fatted calf and kill it, and let us eat and make merry; 24 for this my son was dead, and is alive again; he was lost, and is found.’ And they began to make merry. 25 “Now his elder son was in the field; and as he came and drew near to the house, he heard music and dancing. 26 And he called one of the servants and asked what this meant. 27 And he said to him, ‘Your brother has come, and your father has killed the fatted calf, because he has received him safe and sound.’ 28 But he was angry and refused to go in. His father came out and entreated him, 29 but he answered his father, ‘Lo, these many years I have served you, and I never disobeyed your command; yet you never gave me a kid, that I might make merry with my friends. 30 But when this son of yours came, who has devoured your living with harlots, you killed for him the fatted calf!’ 31 And he said to him, ‘Son, you are always with me, and all that is mine is yours. 32 It was fitting to make merry and be glad, for this your brother was dead, and is alive; he was lost, and is found.'”

Reflection for the day: “Carry your cross on your back and take it as it comes, small or large, whether from friends or enemies and of whatever wood it be made. The most intelligent and happiest of men is he who, knowing that he is doomed to carry the cross throughout life, willingly and resignedly accepts the one God sends him.” — St. John Bosco