Tuesday of the 5th Week of Lent 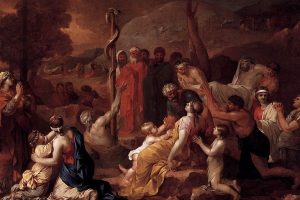 
4 From Mount Hor they set out by the way to the Red Sea, to go around the land of Edom; and the people became impatient on the way. 5 And the people spoke against God and against Moses, “Why have you brought us up out of Egypt to die in the wilderness? For there is no food and no water, and we loathe this worthless food.” 6 Then the LORD sent fiery serpents among the people, and they bit the people, so that many people of Israel died. 7 And the people came to Moses, and said, “We have sinned, for we have spoken against the LORD and against you; pray to the LORD, that he take away the serpents from us.” So Moses prayed for the people. 8 And the LORD said to Moses, “Make a fiery serpent, and set it on a pole; and every one who is bitten, when he sees it, shall live.” 9 So Moses made a bronze serpent, and set it on a pole; and if a serpent bit any man, he would look at the bronze serpent and live.


1 Hear my prayer, O LORD; let my cry come to thee! 2 Do not hide thy face from me in the day of my distress! Incline thy ear to me; answer me speedily in the day when I call! 15 The nations will fear the name of the LORD, and all the kings of the earth thy glory. 16 For the LORD will build up Zion, he will appear in his glory; 17 he will regard the prayer of the destitute, and will not despise their supplication. 18 Let this be recorded for a generation to come, so that a people yet unborn may praise the LORD: 19 that he looked down from his holy height, from heaven the LORD looked at the earth, 20 to hear the groans of the prisoners, to set free those who were doomed to die.


21 Again he said to them, “I go away, and you will seek me and die in your sin; where I am going, you cannot come.” 22 Then said the Jews, “Will he kill himself, since he says, ‘Where I am going, you cannot come’?” 23 He said to them, “You are from below, I am from above; you are of this world, I am not of this world. 24 I told you that you would die in your sins, for you will die in your sins unless you believe that I am he.” 25 They said to him, “Who are you?” Jesus said to them, “Even what I have told you from the beginning. 26 I have much to say about you and much to judge; but he who sent me is true, and I declare to the world what I have heard from him.” 27 They did not understand that he spoke to them of the Father. 28 So Jesus said, “When you have lifted up the Son of man, then you will know that I am he, and that I do nothing on my own authority but speak thus as the Father taught me. 29 And he who sent me is with me; he has not left me alone, for I always do what is pleasing to him.” 30 As he spoke thus, many believed in him.

Reflection for the day: “If any dust of imperfection cling to your heart, be not troubled, but consume it immediately in the fire of divine love, and, sorrowfully asking forgiveness, continue to live in peace.” — St. Paul of the Cross