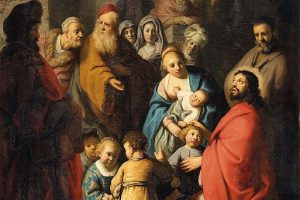 
1 The Lord created man out of earth, and turned him back to it again. 2 He gave to men few days, a limited time, but granted them authority over the things upon the earth. 3 He endowed them with strength like his own, and made them in his own image. 4 He placed the fear of them in all living beings, and granted them dominion over beasts and birds. 6 He made for them tongue and eyes; he gave them ears and a mind for thinking. 7 He filled them with knowledge and understanding, and showed them good and evil. 8 He set his eye upon their hearts to show them the majesty of his works. 10 And they will praise his holy name, to proclaim the grandeur of his works. 11 He bestowed knowledge upon them, and allotted to them the law of life. 12 He established with them an eternal covenant, and showed them his judgments. 13 Their eyes saw his glorious majesty, and their ears heard the glory of his voice. 14 And he said to them, “Beware of all unrighteousness.” And he gave commandment to each of them concerning his neighbor. 15 Their ways are always before him, they will not be hid from his eyes.


13 As a father pities his children, so the LORD pities those who fear him. 14 For he knows our frame; he remembers that we are dust. 15 As for man, his days are like grass; he flourishes like a flower of the field; 16 for the wind passes over it, and it is gone, and its place knows it no more. 17 But the steadfast love of the LORD is from everlasting to everlasting upon those who fear him, and his righteousness to children’s children, 18 to those who keep his covenant and remember to do his commandments.


13 And they were bringing children to him, that he might touch them; and the disciples rebuked them. 14 But when Jesus saw it he was indignant, and said to them, “Let the children come to me, do not hinder them; for to such belongs the kingdom of God. 15 Truly, I say to you, whoever does not receive the kingdom of God like a child shall not enter it.” 16 And he took them in his arms and blessed them, laying his hands upon them.

Reflection for the day: “Be not afraid to tell Jesus that you love Him; even though it be without feeling, this is the way to oblige him to help you, and carry you like a little child too feeble to walk.” — St. Therese of Lisieux